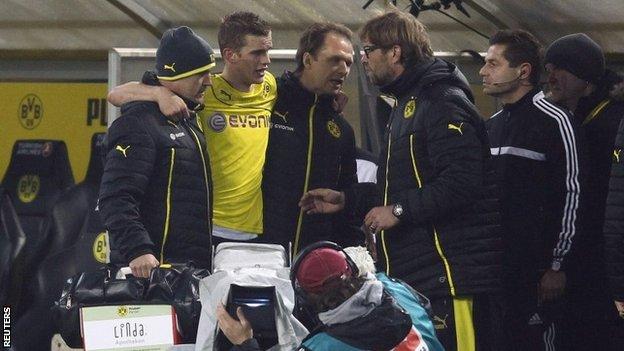 Borussia Dortmund coach Jurgen Klopp says he is more upset by their latest injuries than the defeat by Bayer Leverkusen that left them 10 points behind Bundesliga leaders Bayern Munich.

Midfielders Sven Bender and Nuri Sahin suffered knocks in Saturday's 1-0 loss to second-placed Leverkusen, who are now six points ahead of them.

Last season Dortmund finished second to Bayern Munich in both the Bundesliga and Champions League.

"We lost 1-0, but that's actually the least of our problems today," said Klopp.

"If you want to beat Leverkusen, you need to be really good - and we weren't really good."

Striker Robert Lewandowski said: "We didn't play well and deserved to lose. We are currently in a very difficult situation.

"A lot of players are injured, and another two have been added to that list today. But we must not bury our heads in the sand and forget about the defeat.

"We have a very important game in the Champions League on Wednesday and we need to focus on it."

If Dortmund do not win, then Napoli, who are third in Group F but level on nine points, could take the second qualifying spot which would see last year's finalists eliminated at the group phase.

Meanwhile, Dortmund have been drawn away to Eintracht Frankfurt in the German Cup quarter-final to be played on 11 or 12 February.