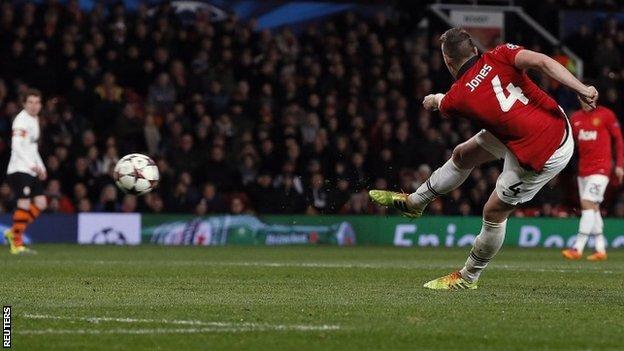 Phil Jones scored a second-half winner to ease the pressure on manager David Moyes as Manchester United finished top of Champions League Group A with victory over Shakhtar Donetsk.

United, who came into the game having lost successive home matches for the first time since 2002, struggled to match Shakhtar for large periods.

But they got the decisive goal when Jones volleyed in from a corner.

Those misses, in the end, did not prove costly as Moyes's men finished their group campaign with an impressive 14 points and four wins from six matches.

But for most of this match, there was one team who played like the United of old, and it was not the home side.

The three-time champions looked sluggish and lacked invention at times - two characteristics that rarely reared their heads under the stewardship of Sir Alex Ferguson.

But what they do have - which other struggling sides in the Premier League do not - is quality and experience of getting out of difficult situations.

And it was the quality of delivery from substitute Robin van Persie and the finish of England international Jones that helped United avoid the ignominy of three successive home defeats for the first time since 1962.

For 60 minutes, United were chasing Shakhtar, who zipped the ball about brilliantly on the Old Trafford surface.

The English champions' best chances, up to the time of the goal, came on the counter and from errors by the Ukrainian side.

Two fell to Young. The former Aston Villa winger first did brilliantly to nick the ball from Darijo Srna before lifting the ball above keeper Andriy Pyatov but wide of the far post.

He then sliced a shot wide with the keeper to beat after Wayne Rooney had played his team-mate in. In between those efforts, Rooney looked like he was about to burst the net, but was stopped from doing so by Olexandr Kucher's outstanding block.

Jones, aside from his agility on the goal, and Ryan Giggs looked relatively cumbersome alongside the sprightly Brazilians of Taison, Alex Teixeira and Douglas Costa, who circled around them.

It was only when 40-year-old Giggs - making his 149th appearance in the competition - was replaced by Tom Cleverley that United looked more competitive in the middle.

Van Persie came on for Young at the same time. Four minutes later, he was involved in the opener.

The Dutchman, who is as effective on set-pieces as he is in front of goal, delivered a wicked in-swinging corner that found its way to Jones, who swung his leg at the ball and smashed a shot past Pyatov.

By this stage, Shakhtar knew that Bayer Leverkusen, a point behind them in third at the start of the evening, were ahead against Real Sociedad and on course to beat them to second place in the group.

Their heads dropped further after the goal and they failed to muster an effort of note in the closing stages, having earlier gone close through Teixeira, whose angled shot went a yard wide, and Yaroslav Rakitskiy, whose deflected effort spun off the post.