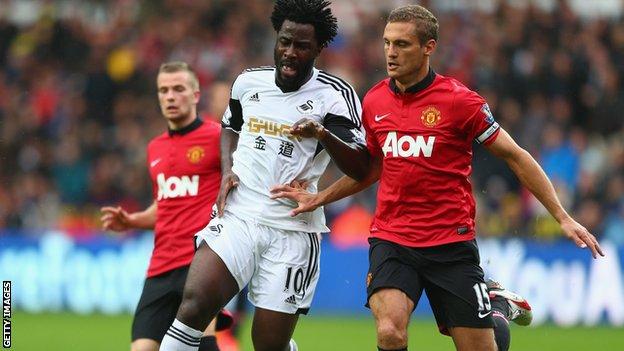 Swansea City have been drawn away to Manchester United in the third round of the FA Cup.

Cardiff City also have an away tie against fellow Premier League opposition as they face Newcastle United.

Wrexham will play at Championship side Charlton Athletic if they can beat League Two leaders Oxford United second round clash on Monday.

Ties will be played over the weekend of 3-6 January.

Elsewhere, the highlight of the third round draw is the derby between Arsenal and Tottenham at the Emirates.

The last time north London rivals Tottenham and Arsenal met in the FA Cup was the 2001 semi-final, when Robert Pires gave the Gunners a 2-1 win at Old Trafford.

Norwich entertain Fulham and West Brom will play Crystal Palace at home in the other all-Premier League ties of the round.

Liverpool have been given a tie at home to either League One Oldham or League Two Mansfield.

The Latics knocked Brendan Rodgers's men out of the fourth round of last season's competition at Boundary Park, while a Luis Suarez handball ensured Liverpool avoided an FA Cup third-round shock at Mansfield Town at this stage last season.

Other ties include Championship leaders Burnley travelling to Southampton, a north west derby between Bolton and Blackpool, and Harry Redknapp's QPR facing Everton at Goodison Park.

Ties to be played over the weekend of 4-5 January