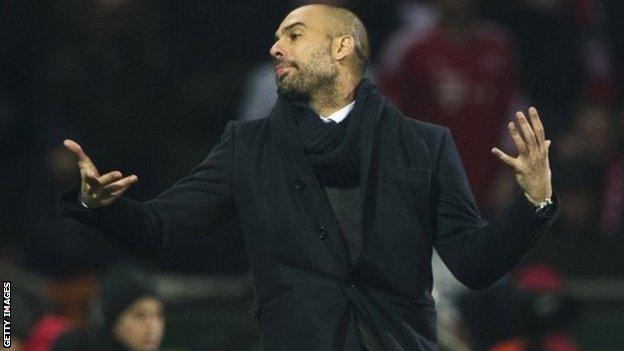 Coach Pep Guardiola said he could not take all the credit after Bayern Munich's 7-0 victory at Werder Bremen.

The European and German champions are now unbeaten in 40 Bundesliga matches, including all of Guardiola's 15 in charge.

"I'd like to say a big thank you to my team, because they were very, very good," he told the club website.

"The club brought this team together. And the coach is good when he has good players. I'm honoured to be coach."

Bayern led 3-0 at half-time thanks to an own goal from Assani Lukimya and efforts from Daniel van Buyten and Franck Ribery.

After the weekend Bayern are 10 points ahead of Borussia Dortmund, who were expected to be their main title rivals, and four clear of Bayer Leverkusen

Guardiola, who was appointed Bayern boss in the summer, added: "I'm delighted with a game at such a high level. Our positioning was good for the first time this season."

Defender Jerome Boateng said: "The coach refuses to let up because he wants us to keep getting better. We were totally focused from the start and never faded, and that's when you get a result like that because we got on a roll."

Meanwhile, Bayern have been drawn away to Hamburg in the German Cup quarter-final to be played on 11 or 12 February.

They face the same opposition on Saturday in the league before a six-week break for Christmas.