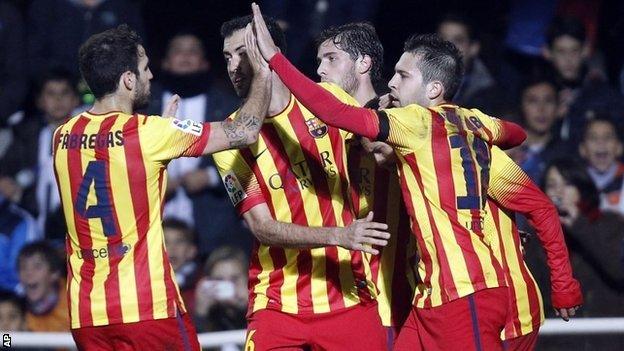 The Spain left-back played 80 minutes after hamstring and thigh injuries.

"Physically, I am much better," the 24-year-old said. "I've learnt not to rush things and to look after myself better. I'm happy to be back."

Jean Marie Dongou, an 18-year-old Cameroonian who has come through Barcelona's academy, came on with 12 minutes left and scored his first goal for the club

Coach Gerardo Martino said: "We knew that Alba was fit and we need him to get some confidence back."

For Barcelona, who host Celtic in their final match in Champions League Group H on Wednesday, the game was a much-needed victory after two successive defeats.

They actually fell behind against the third-tier side to a goal from Fernando before a brace from Pedro and goals from Cesc Fabregas and 18-year-old debutant Jean Marie Dongou saw them establish a convincing first-leg advantage.

Martino said: "In general, we were good. We played a third-tier side and we did so with humility and respect.

"We were coming off two defeats and when we were behind tonight - and when we drew level - we showed that we were serious about winning. We knew we had to. Now we are in a great position to get through to the next round."

The second leg is on Tuesday, 17 December at the Nou Camp.