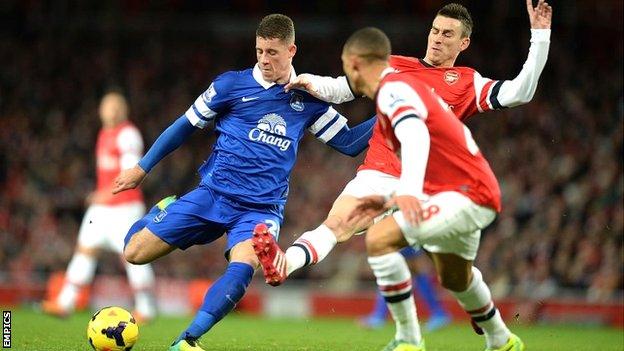 Barkley, 20, has won three England caps and been tipped for a place in the squad for the 2014 World Cup in Brazil.

He can give us something unique in English football

"I don't think there's any doubt that if Barkley doesn't get injured he's going to be top of the tree," said Match of the Day's Hansen, who won eight league titles with Liverpool.

"He has got absolutely everything."

"I can see some Ballack in him and some Gazza," the Spaniard said.

"Ross has incredible potential. We need to give him time and accept he is not ready yet. That will take time, but he has absolutely everything."

Gascoigne was widely regarded as the most gifted English player of his generation.

He was one of the stars of the 1990 World Cup when England reached the semi-finals and won 57 international caps between 1988-98.

Ballack won 98 caps for Germany and spent four years with Chelsea from 2006-10. He helped the Blues to the Premier League title and three FA Cups.

"He has a bit of Gazza about him," tweeted Lineker."

"Similar stature, technique, confidence, ability to glide past opponents and a certain naivety."

Liverpool-born Barkley, who impressed again for Everton in a 1-1 draw at Arsenal on Sunday, made his debut for the Toffees two years ago in a 1-0 defeat by QPR, but then spent time on loan at Championship sides Sheffield Wednesday and Leeds.

Having established himself as a regular at Goodison Park under Martinez, he made his first England appearance as a substitute against Moldova in September.

Barkley came off the bench twice more in last month's friendly defeats against Chile and Germany at Wembley.

"We have to make sure we give him at least another 50 starts to see his evolution," said Martinez.

"As a country, we need to be a little bit more protective about our youngsters because, if we look after him properly, he can give us something unique in English football and to the nation.

"I've never seen an English player with that sort of mentality."