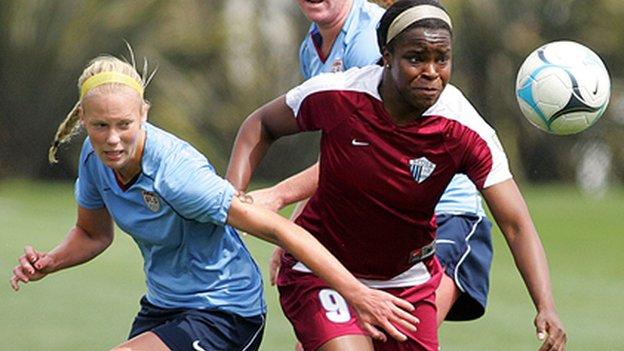 "Some players will look for new challenges abroad and some I had to make the difficult decision to let go, which in certain cases might have been surprising for those outside the club," he said.

"This year, I am determined to work with a tighter group of players and a more focused group.

"Knowing that we have to fill a few defensive positions in the team, I am delighted that Ella has joined us for the season.

"She comes highly recommended and will be here for the start of the pre-season."

Glasgow, who secured their seventh consecutive title while , are looking to strengthen after for the second year running.

They have already but they have yet to announce which players will be released and club manager Laura Montgomery insists they remain in negotiations with players who could have options elsewhere.

Montgomery was pleased with the latest signing and pointed out that Stephan had played alongside some of the USA's top players.

"It is a fantastic piece of business for our club to have signed a player like Ella and I think highlights not only how ambitious we are as a club to keep pushing forward but also how we can attract players of Ella's capability to play for Glasgow City," she said.

"Ella has spent her career so far in teams containing the likes of Alex Morgan, Kelly O'Hara, Lauren Chaney, Tobin Heath and Casey Noguiera, both at international and club level, and we look forward to benefiting from that level of experience at City.

"We had a very successful year this season, but we are already planning on how we surpass this for 2014 and having Ella on board will certainly help."

Stephan was looking forward to her new challenge with Glasgow.

"I am very excited about the opportunity to play for the Scottish team," she said. "I have heard many great things about them."