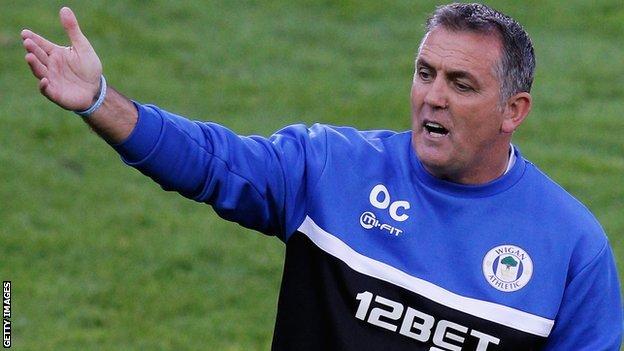 Wigan chairman Dave Whelan has revealed that Owen Coyle's exit has cost the club "in the region of £500,000".

The Latics parted company with manager Coyle on 2 December, less than six months after he was appointed by the FA Cup holders.

"Owen had a difficult job but I just don't think he was part and parcel of Wigan Athletic Football Club," Whelan told the BBC.

"It costs me getting rid of any manager, they all get a contract and they get a certain amount of money when they get dismissed and we have to honour the contract. It'll be somewhere in the region of half a million pounds," Whelan confirmed to BBC Radio 5 live Sportsweek.

A last Sunday, their fourth loss in five matches, left the Latics 14th in the Championship.

Ex-Bolton boss Coyle was given the task of leading Wigan back into the Premier League following relegation last season.

But the 47-year-old won only seven of his 23 games in charge and departed with Wigan six points from a play-off spot.

"Sometimes managers are successful, sometimes they are not," Whelan said. "When we lost three games in a row I had been watching the selection of the team and the performance and I wasn't happy with the decisions he was making.

"We were good friends so there was no personality clash whatsoever.

"A manager has to come across well and give you the impression he knows the game and you end up interviewing them and it's a finger in the air moment. If he's successful it's great but if in Owen's case he wasn't, the sooner you do something about it the better."

Coyle was replaced on Saturday by Brentford boss Uwe Rosler after Whelan agreed a compensation fee with the London club to bring in the former Manchester City striker.