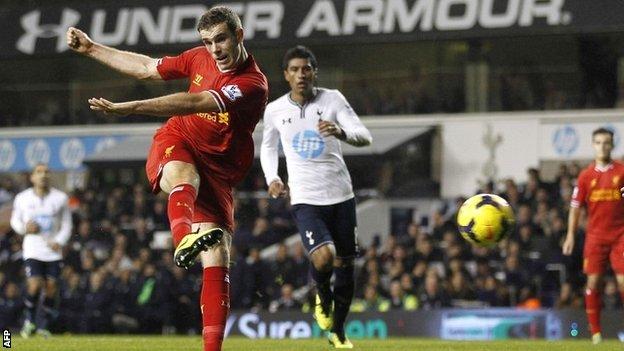 The Uruguayan's 16th goal of the season took him past the total for the whole Spurs side when he found the bottom corner from Jordan Henderson's flick.

Philippe Coutinho hit the bar before the excellent Henderson volleyed in.

Paulinho was then sent off for a high kick on Suarez before goals from Jon Flanagan, Suarez and Raheem Sterling completed Spurs' humiliation.

Liverpool were without injured skipper Steven Gerrard, who last week joined Daniel Sturridge on the treatment table, but they could have easily scored more as they took control early on and never let it slip against a poor Tottenham team, who did not have a shot on target.

This was Liverpool's first victory in seven visits to White Hart Lane, while Tottenham ended a five-game unbeaten run with another disappointing display in front of their home fans.

Andre Villas-Boas's side have now won just one of their last six matches at White Hart Lane and they must seek to overturn that form if they are to establish themselves as Champions League contenders, let alone fight for the Premier League title.

More prominently, this result will lead to further questions about the Portuguese coach's future having already fielded them after a 6-0 loss at Manchester City last month.

Spurs came up against a Brendan Rodgers side led by the irrepressible Suarez, who took his amazing scoring run to 14 goals in eight Premier League games and 17 overall this season.

But the South American, who was captain for the day, was ably supported by the effervescence of Henderson and Sterling, who tore shreds out of Kyle Naughton before the Spurs left-back was replaced at half-time.

Henderson has had his critics at Anfield but appears to be finding consistent form now and he played his part in the opener after almost being played in by Suarez.

But with Michael Dawson sliding in to intercept, the Premier League's top scorer collected the loose ball, danced around Kyle Walker and slotted into the bottom corner.

Suarez, Coutinho and Glen Johnson all went close to doubling the lead before the half hour, with Nacer Chadli heading over from an isolated Spurs attack, but the visitors went 2-0 up before the break with Sterling involved again.

His raking ball from the right found Coutinho, who touched the ball to the onrushing Henderson. His first shot was saved, but then after Hugo Lloris could only push Suarez's effort up into the air, Henderson volleyed in.

Roberto Soldado, who retained his place after a midweek hat-trick against Anzhi Makhachkala, then had the ball in the net but referee Jonathan Moss believed the Spaniard fouled Liverpool goalkeeper Simon Mignolet after a poor touch by the Belgian.

As the half-time whistle blew boos echoed around White Hart Lane, reflecting a woeful first period for the hosts.

Perhaps unsurprisingly, Ezekiel Fryers came on for Naughton but Spurs could not contain Sterling, whose cross was headed against the post by Mamadou Sakho from only two yards out.

And a nightmare afternoon for Spurs continued when Paulinho received his marching orders for a high foot, which connected with Suarez's chest.

A sign of how dominant Liverpool were came when Flanagan smashed in off the bar for his first Liverpool goal, before Suarez chipped in and Sterling steered home a crisp shot.

Liverpool's squad might not be as strong as some of the other title contenders but when they play like this they will not fear upcoming games against Manchester City and Chelsea before the year is out.

See a photo gallery of all the action from Sunday's Premier League matches on the BBC Sport Facebook site.