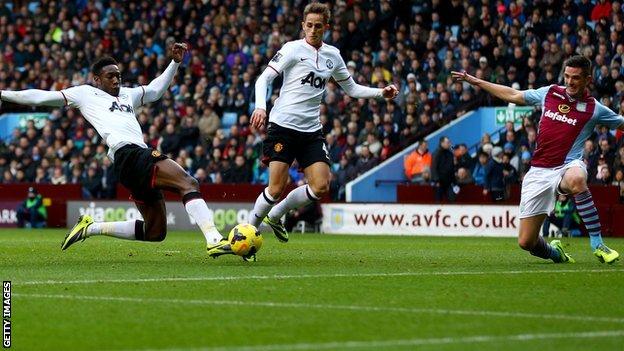 Welbeck's goals came in the space of three minutes - his opener coming when he slotted in after Adnan Januzaj's header rebounded off the post.

The England striker then slid in to score from Antonio Valencia's cross.

Villa struggled to cope with the visitors and Wayne Rooney set up Tom Cleverley to drive in a third.

United had picked up just two points from their previous four league matches but the style with which they saw off Villa hinted at a return of form and confidence.

The Red Devils are still 10 points behind top-flight leaders Arsenal and seven points adrift of the top four, but they made sure they did not lose a third Premier League game in succession for the first time since December 2001.

Villa had not beaten United at home since 1995 and that record only ever looked like being extended as they lost for the fifth time in eight league outings at their Midlands base.

The home side were hoping to take capitalise on United's poor form and applied some early pressure, with winger Marc Albrighton twice shooting from distance, only for his efforts to be comfortably saved by keeper David De Gea.

However, the visitors responded in emphatic fashion, with two goals from Welbeck putting them firmly in command by half-time.

Rafael's determination helped him cross from the right and, after the unmarked Januzaj's header came back off the inside of the post, Welbeck reacted quickest to side-foot in the rebound from six yards.

The home side barely had time to recover before falling further behind. Villa defender Nathan Baker gave the ball away and Welbeck laid a pass off to right-winger Valencia before charging into the area and beating Januzaj to slot in the Ecuadorian's low cross.

The uplift in United's demeanour from the two goals was palpable and they slickly scythed through Villa with a regularity and ease that threatened more goals.

The pace and trickery of Valencia was particularly potent, and he pulled the ball back for Rooney to drag a shot wide before threading a pass through to Welbeck, who angled his effort beyond Villa keeper Brad Guzan's right-hand post.

Villa rarely troubled De Gea as striker Christian Benteke continued to look out of sorts and notched up a 10th game without scoring.

And United wrapped up the win when the impressive Rooney slid a lovely weighted ball into the path of Cleverley, who scored his first league goal a year to the day since his last one.

Another positive note for United was the 70th-minute introduction of midfielder Darren Fletcher, who returned to first-team action for the first time since Boxing Day last year as he continues his recovery after bowel surgery.

See a photo gallery of all the action from Sunday's Premier League matches on the BBC Sport Facebook site.

"I thought we started as well as we have done for a number of weeks but the first goal was poor as we should have stopped the cross.

"The second and third goals, we were in possession before they scored.

"The pleasing thing is we never gave up. The disappointing thing for me is the manner of the goals."