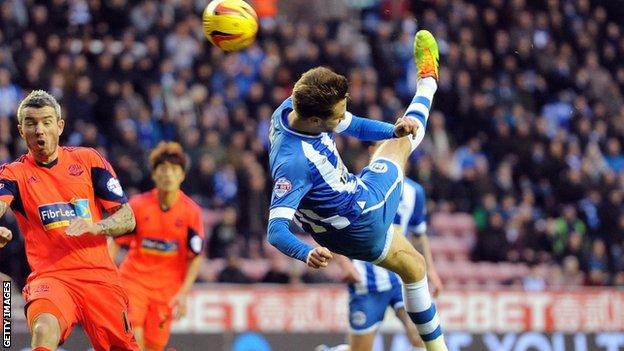 Neil Danns' header pulled a goal back for the visitors after the break and Andre Moritz's penalty restored parity.

But McManaman steered in the winner with 22 minutes left.

The last time Latics played at the DW Stadium they were under Owen Coyle's watch and were three goals down against Derby inside 30 minutes, eventually losing 3-1.

A fortnight on and with Rosler now in the home technical area, Wigan's up-field pressing quickly reaped rewards.

Striker Grant Holt was on the end of Watson's back-post cross and Matt Mills, losing the physical tussle with the former Norwich striker, saw the ball ricochet into his outstretched arm.

Referee Kevin Friend initially ignored the hosts' appeals only to point to the spot on the advice of his assistant and, from the resulting penalty, Watson fired Wigan ahead.

The lead doubled soon after as Chris McCann's weak shot ballooned in the air and Powell, on loan from Manchester United, connected with a bicycle kick which looped over Andy Lonergan in the Bolton goal.

In a pulsating derby, Dougie Freedman's men pulled a goal back four minutes after the restart when, after Scott Carson pushed Moritz's free-kick away, the midfielder put the ball back in where Danns was on hand to halve the deficit with his head.

Looking for a leveller, Moritz stung Carson's palms from 30 yards and Danns then hit the crossbar with a flicked header, before Friend levelled the penalty count.

Lee Chung-yong went down clutching his face with Emmerson Boyce's boot raised high and, to Wigan's fury, a spot kick was awarded with Moritz converting.

Bolton pushed forward for the leveller with Joe Mason squandering a golden opportunity by poking wide after Moritz's run.

Shots on Target
Home5
Away9