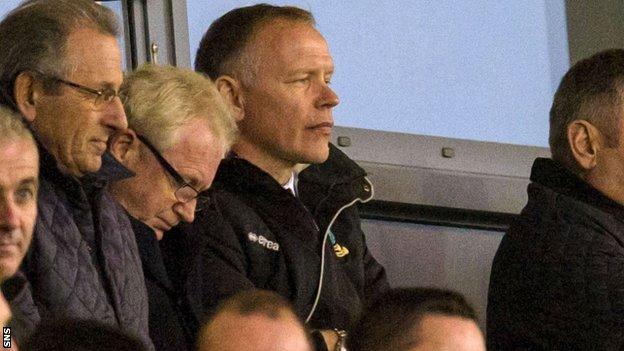 Inverness manager John Hughes was pleased to finally cast an eye his new charges as they drew with St Mirren.

Hughes sat in the stand for the goalless affair in Paisley, but insists he will be taking on his leading role in the next few days.

"They know how I work. I can get another week to get in about them," said Hughes.

"The players said to me they said they were better individually and collectively."

The Highland outfit marked Hughes's first match as manager with battling performance, although struggled to hold St Mirren back in the first half.

In a match of few chances, St Mirren's Steven Thompson struck the woodwork, but Billy McKay and Marley Watkins were equally unlucky and Hughes had the opportunity to assess the performance from afar as youth coach Duncan Shearer took charge.

"I felt there were one or two self-inflicted mistakes which put St Mirren on the front-foot," said Hughes. "They were the better side in the first half, our keeper had two great saves to keep us in the match.

"It was important that we got this game out of the way, we can now settle in to it."

It was important that we got this game out of the way, we can now settle in to it

Hughes also had praise for his predecessor, Terry Butcher, who left Inverness following a successful spell to take charge at Hibernian.

He added: "I don't know how Terry does it.

"He brings them up from all over the place and they put them out on that park - there's a real togetherness."