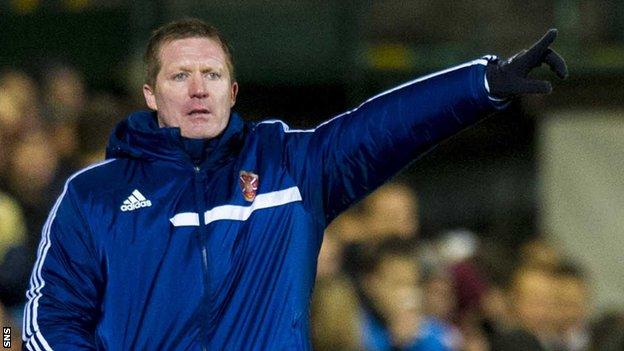 Hearts manager Gary Locke felt "big decisions went against" his in the 4-1 defeat by Dundee United at Tannadice in the Scottish Premiership.

Despite recovering from a goal down in the first half, Hearts conceded three second half goals to make it 11 against from their last two matches.

"A couple of decisions turned the game on its head," said Locke.

"It turned the game in their favour. I don't want to say too much, because I'll end up in trouble myself."

Locke's side were one goal down inside the first 16 minutes when Stuart Armstrong fired home, but Jamie Hamill converted from the spot to level just four minutes later.

It was not until the second half when Brian Graham's header put United back in charge that Locke felt his side had been unfairly treated, with Locke claiming a foul had been committed before the ball flew into the back of the net

"Calum Paterson feels he got fouled," said Locke. "Then at the other end, Jamie Walker went down in the box and got booked for diving, which I couldn't believe.

"So a couple of big decisions went against us."

Despite a spirited reply from Locke's young side, Gary Mackay-Steven fired in United's third, then John Rankin scored with the last kick of the ball to seal the 4-1 win - although Locke insists he preferred to lose big than sit back and accept a narrow defeat.

"It was an even game. I thought we applied ourselves really well, especially in the first half," added Locke.

"But then we had to go for it and we lost a couple of late goals. We had to push men forwards to try and get an equaliser.

"If you're looking at the game, we were very competitive - we looked comfortable in the game, then in the second half at 2-1 down late in the game, we put two strikers on the pitch and got caught on the counter-attack a couple of times.