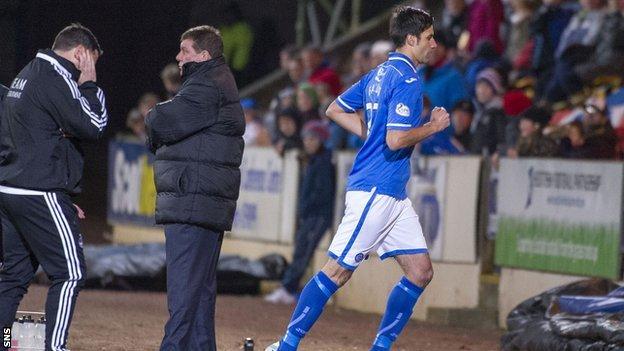 Tommy Wright suggested he has no gripes with the decision that had Rory Fallon sent off against Aberdeen.

The New Zealander was dismissed one minute after coming on as a substitute following the alleged use of the elbow in a challenge with Michael Hector.

"He hasn't come to me saying he hasn't done anything so I take it from that that the referee has made the right decision," said the St Johnstone boss.

"Everyone I have spoken to indicates it is the right decision."

And Wright added: "But we will see the footage and we'll deal with it in house if we feel that the decision is right.

"He has been sent on to give us a bit of aggression. He has channelled it in the wrong way if that's the case.

"That kills the game for us. We could have a right go in the last 20 minutes but going down to 10 men, it was always going to be a really uphill task to get back in the game."

St Johnstone were already 1-0 down before Fallon's departure, having gone behind to their former loan player Peter Pawlett.

And Niall McGinn's solo run and wonderful finish sealed the points for Aberdeen late on.

"I don't think there was much between the teams," added Wright.

"We are disappointed with how we passed it in the first half. A misplaced pass gave them the opportunity to score the goal. It's a good strike from Peter but it takes a deflection.

"We have a good chance to get back into it and [Jamie] Langfield makes a great save.

"The second half was pretty even. We are ready to push on in the last 20 minutes and we got a sending-off."