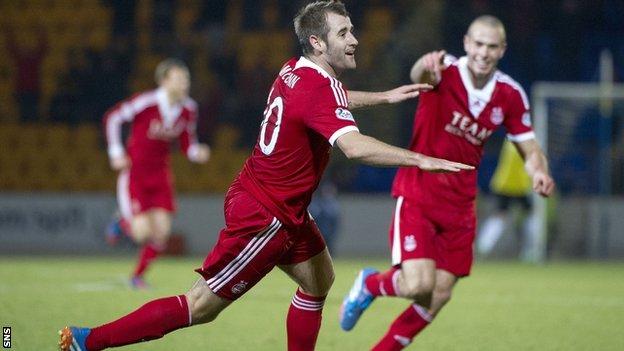 Aberdeen manager Derek McInnes saluted the two pieces of individual quality that gave the Dons a 2-0 win at St Johnstone.

Peter Pawlett and Niall McGinn scored with fine finishes to take the Dons to fourth in the Scottish Premiership.

"All in all, two goals worthy of winning a game," McInnes told BBC Scotland.

"Any team that comes here and wins has to do well and show a lot of qualities. I thought we were that team today."

McInnes, St Johnstone manager between 2007 and 2011, returned to McDiarmid Park competitively for the first time since leaving for Bristol City.

The Dons' journey to victory in Perth was helped by the sending off of former Aberdeen striker Rory Fallon, dismissed by referee Willie Collum for a challenge on Michael Hector one minute after coming on as a substitute.

"I did think we were standing up to their threat," said McInnes. "But the sending off certainly helped us and it took the wind out of St Johnstone's sails.

"We had to fight hard for that and dig deep. There were a lot of individual battles.

"St Johnstone had only lost four goals at home in the league previously this season and you can see why. They work really hard for every inch on that pitch.

"The clean sheets are pleasing because it indicates how much work is getting done ahead of the back four.

"I thought the back four were outstanding because they had to deal with a lot of traffic coming their way."

The clean sheets are pleasing because it indicates how much work is getting done ahead of the back four.

It was Pawlett and McGinn's third and eighth goals of the season respectively, with McInnes clearly thrilled by their contribution.

Former St Johnstone loanee Pawlett has impressed many this season, playing between the midfield and attack.

"We like him in that position, it allows him to play with freedom," added McInnes.

"What he's very good good at is mixing his game up. He can work to space and he can go and take people out the game with his pace.

"Niall likes working off that left-hand-side. What a finish, it was still flying at pace when it hit the back of the net."