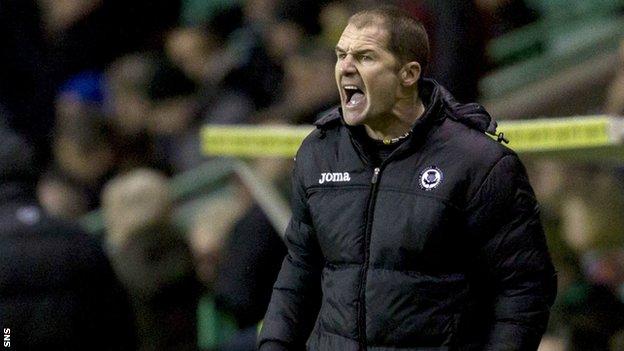 Partick Thistle manager Alan Archibald was frustrated by the loss of a late goal in .

The Jags had led through a fine solo effort from Kris Doolan, but Hibs striker James Collins denied them the win with a late injury-time leveller.

"It was a great away performance against a good Hibs side, but it definitely feels like a defeat."

The Firhill men thought they had managed to secure their fourth away success of the season after withstanding heavy Hibs pressure in the second half.

However, a late defensive lapse allowed Collins space in the box and he rifled in Paul Hanlon's knockdown with almost the last kick of the ball.

Archibald said: "To come to Easter Road and create the chances we did you're looking to win the match, but you know the way Terry [Butcher] plays towards the end of the game. It was the same at Inverness, he throws everything at you.

"It's disappointing to lose a goal from a set play very late on in the game because I thought we were outstanding."

The Jags gaffer hailed Doolan's stunning effort at the start of the second half that gave them the lead. The striker started the move on the half-way line, beat a string of Hibs players, before dinking the ball over Williams.

"We thought we could get a bit of joy off him. He works tirelessly up there, sometimes on his own, sometimes too much of a distance from rest of the players, but what a goal he took from the half-way line and done fantastic.

"It's a good away point and we'll go and build on it. Hibs are only three points ahead of us so we'll take the positives from it and move on - we've got two big home games coming up for ourselves now."