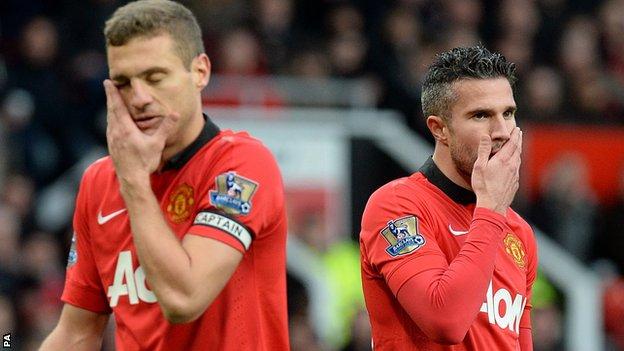 David Moyes insists his Manchester United side are still in the Premier League title race despite suffering two home defeats in the space of four days.

United are 12 points behind leaders Arsenal, who play Everton on Sunday.

After a 1-0 loss to Newcastle followed defeat by Everton, Moyes said: "I stand firm we will be very close. I hope we are in it at the end of the season."

When asked why he was so confident, he said: "The players - because I am working with the champions."

Saturday saw Newcastle clinch their first win at Old Trafford for 41 years as United slipped to their third home defeat in the league this season.

Moyes's side struggled to respond after going behind against the Magpies and they have already dropped 13 out of 24 points at Old Trafford, four more than in the whole of the last campaign.

They have also suffered back-to-back home league defeats for the first time since the 2001-02 season but Moyes, who replaced Sir Alex Ferguson as manager in the summer, is adamant there is no reason to panic.

"I think the game against Everton was very similar to the one against Newcastle," he explained. "If we had come out on top in both games I don't think anybody would have said an awful lot about it.

"Because we have not, and because we are Manchester United, we have to do better.

"We have to play better, pass it better, make more chances and take more opportunities.

"But we have just not been able to do that in the last couple of games.

"We were needing something to go for us, to give us a bit of confidence.

"Their goal was a little bit fortunate. Patrice Evra hits the ball against the back of Moussa Sissoko's head and he goes through to cut it back."

Moyes received a mixed reaction from United fans at the final whistle - there were some boos and some supporters had already left, but the Stretford End applauded him and sang his name as he made his way towards the tunnel.

"The United fans have been great," Moyes added. "Great to me, and great to the club.

"How big a test is this for me? It's the same test I have done ever since I have started as a manager. The good thing is that I am more experienced now and hopefully I will be able to handle it much better."

To see a gallery of images from Saturday'sPremier League games go to the BBC Sport Facebook page.