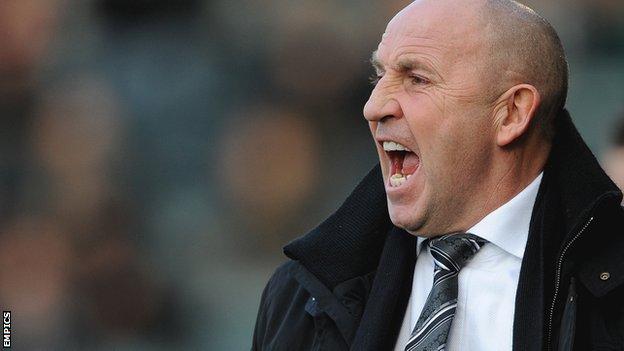 Southport have named John Coleman as their new manager, less than 24 hours after

The 51-year-old has been out of management since being in January.

Coleman played for Southport between 1985 and 1987, scoring 71 goals in 142 games, and takes charge with the club 18th in the Conference Premier.

His first match as Sandgrounders boss will be at Salisbury on 21 December.

John Coleman has had success as a manager at non-league level before, guiding Accrington Stanley to the Conference title in 2006

"John has all the experience and knowledge to take Southport forward," chairman Charlie Clapham told the club website.

Former Blackburn and Aston Villa defender Wright, 42, was appointed as Liam Watson's replacement in May and won four of his first six league matches at the helm.

However, Southport have won just twice in the league since the end of August and lie two points above the relegation zone.

Coleman guided Accrington back into the Football League in 2006 and stabilised Stanley in League Two before ending his 13-year reign by leaving for Rochdale in January 2012.

But he could not save Dale from dropping into the fourth tier later that year and was dismissed after just 12 months at Spotland.

Clapham continued: "Everyone connected with the club will acknowledge it has been a very difficult period for the club after recent results, hence the actions the club with regret had to take.

"We now move on with a new manager who has all the credentials to achieve results."