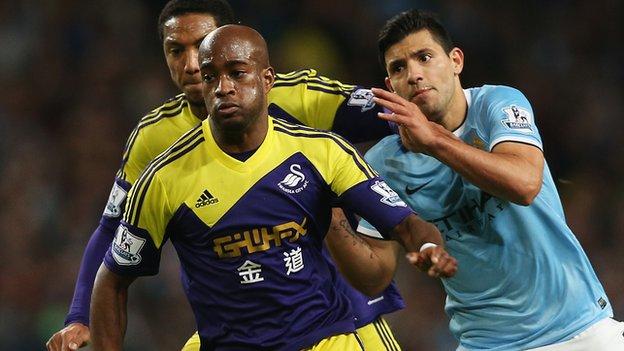 Defender Dwight Tiendalli says Swansea will secure another three points if they play like they did in the win against Newcastle.

Swansea recorded only their second home win in the Premier League this season, with their 3-0 win against the Magpies last Wednesday.

Hull are the next visitors to the Liberty Stadium tonight.

"On Monday against Hull if we reach our normal level we have to win that game," said Tiendalli.

A Swans win would take them above the 20-point mark with four games to go to the halfway point of the Premier League campaign.

Tiendalli believes a good performance should be enough to do that.

"We have to make every home game difficult, even against the big teams," he said.

"Me as a person, I do not look so much at Hull.

"We have a great squad with great players and if we reach our normal level then I'm positive we will win on Monday."

Tiendalli also believes this season's Swans squad has greater depth than last year's which finished ninth and won the 2013 Capital One Cup.

"Our squad is stronger than last season. There is no doubt," said Tiendalli.

"You can see the squad is bigger and you can see when we have injuries there is always someone who can come in and do the job.

"In football, when someone is injured another person has to come in and pick it up.

"That is an important thing this season."

Tiendalli's return to Liberty Stadium prior to the Swans' Europa League game in Romania against Petrolul Ploiesti in August, 2013, came as something of a surprise after he and the club failed to agree terms earlier in the summer.

The 28-year-old missed out on a full pre-season and has had to wait for injury to Angel Rangel to provide him with a chance.

But he insists he is happy to take any first-team action as it comes.

"I have not been frustrated," said Tiendalli.

"I came here with no games in my feet and I need to get the rhythm and my fitness.

"But I feel better, I feel good and sharp. Now I have to continue.

"I'm not at my best, but I think things are good.

"Against Man City I felt good and I felt good against Newcastle. These games are good for me to perform well.

"But it's all about the team performance and at the moment the team is performing well."