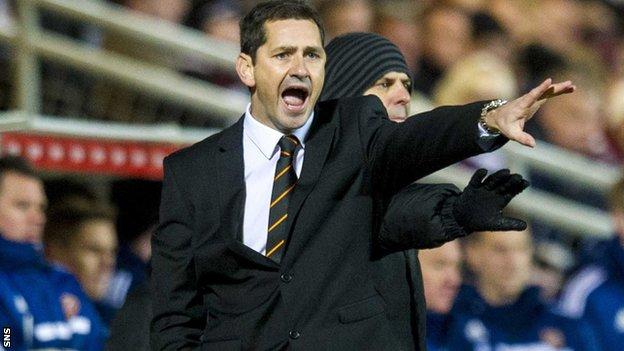 Manager Jackie McNamara believes there is more to come from Dundee United after they recorded their sixth straight home win with a 4-1 victory against Hearts.

"It's good at the moment," said McNamara. "I still think we can play a lot better than we did today.

"There's a lot we can improve on."

With just 16 minutes gone, Mackay-Steven set up Armstrong to slot home, while Graham's header put United back in charge after Hearts had levelled through a first-half penalty from Jamie Hamill.

With Hearts tiring in the final minutes, Mackay-Steven fired in an impressive third and John Rankin's deflected shot with the last kick of the ball sealed the win.

McNamara said he was aware that Hearts would be hurting following their 7-0 drubbing by Celtic last weekend and was mindful that they would be out to repair the damage.

"We knew they had some good young players in their team, but the good thing is how we responded to it," added McNamara.

"We kept going and doing the same things, passing the ball and taking the game to them.

"We had good chances to catch them on the break at times - I'm delighted because it keeps the momentum going, especially at home."

United have scored 22 goals in their six-game winning run at home and McNamara said it was important for his players to maintain their good run of form.

"The good thing is that the boys keep going, keep doing the same things and have the belief that they can score goals and get more," he said.

"It's a great habit to be in and hopefully they can continue it."