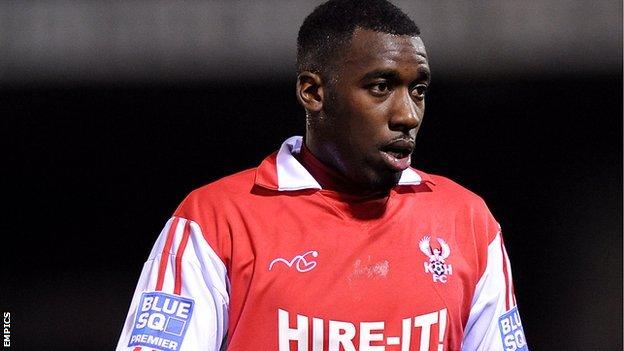 Three second-half goals helped Alfreton come from behind to beat Kidderminster, who had Amari Morgan-Smith sent off.

Ex-Kidderminster striker Michael Wylde levelled after a mistake from goalkeeper Danny Lewis before Morgan-Smith was shown a second yellow card.

An unmarked Wylde then put the visitors in front before John Akinde sealed the points with a last-minute penalty after he was brought down by Lewis.

The defeat was promotion hopefuls Kidderminster's second in a row and a first at home in the Conference Premier since they went down 2-0 to Luton back in August.

"It's always a difficult place to come. We set up early doors to stay in the game and I thought we gave a poor goal away. We lost possession of the ball 35 yards from goal, but then it was just about growing into the game.

"We knew if we could get it into John Akinde he'd cause them problems and he's done that again.

"I'm really pleased with the performance. We just had to find a way of stopping them run and that's what we did."