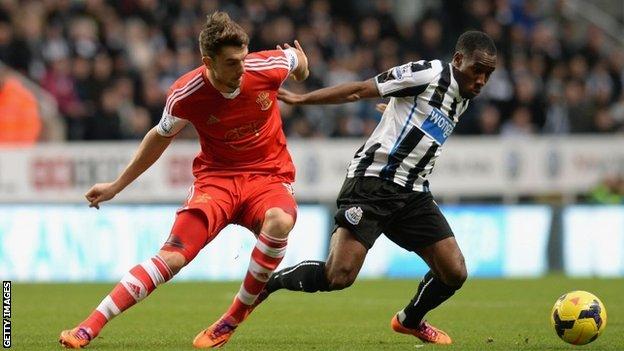 The Magpies took the lead in the first half when Yoan Gouffran took the ball around keeper Paulo Gazzaniga after a poor error by defender Jos Hooiveld.

Southampton equalised through Rodriguez, who slotted in after a great one-two with Steven Davis.

A match which was tepid at best in the first half burst into life in the second - with the entertainment provided by unexpected sources.

Apart from an ambitious 20-yard volley from a corner by Mathieu Debuchy there was little of note to report in the opening 25 minutes.

Gouffran changed that when he scored Newcastle's opener. The Frenchman, who joined the Magpies in January, was at his sharpest when he pounced after Hooiveld's error before tapping in. That was the £500,000 signing's fourth goal in as many home games.

Saints manager Mauricio Pochettino's experiment with Rickie Lambert, Dani Osvaldo and Jay Rodriguez in attack did not work in the opening 45 minutes, so the Argentine introduced Lallana for Osvaldo at half-time.

That piece of tinkering paid dividends in the 65th minute when Lallana started off the move that led to the equaliser.

The England international picked up the ball in the middle before feeding Rodriguez. He then found the impressive Davis, who earlier hit the woodwork with a 20-yard shot, before collecting the return and finishing with a low sweeping shot from inside the area. It was an excellent counter-attack.

Newcastle should have re-taken the lead soon after but Remy inexplicably failed to score his ninth of the season - firing wildly from close range following Gazzaniga's atrocious clearance.

While some Saints fans may have been amused by Remy's miss, the laughter spread around the whole stadium when Newcastle midfielder Moussa Sissoko sent referee Mike Jones to the turf after accidentally slapping him in the face.

The Cheshire official needed treatment for a bloody nose but took the view that the France international did not intend to make contact with him.

And with a few minutes of the match remaining a scuffle broke out on the sidelines which resulted in the goalkeeping coaches of both sides - Southampton's Toni Jimenez and Newcastle's Andy Woodman - sent off following a disagreement over Morgan Schneiderlin's foul on Massadio Haidara.

It was an incident that Newcastle manager Alan Pardew later described as "a bit of panto season".