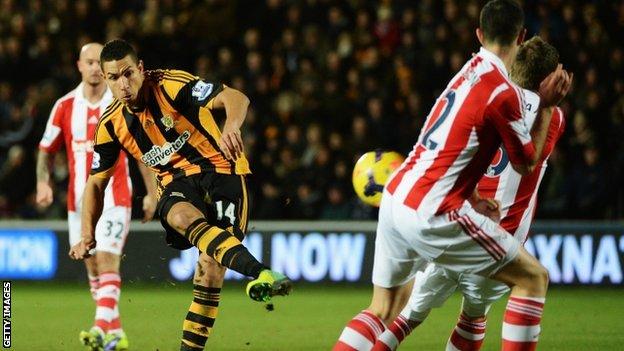 Begovic, who passed a late fitness test on a thigh injury, produced fingertip first-half saves from Ahmed Elmohamady and Yannick Sagbo, before brilliantly keeping out a header from the former.

Stephen Ireland had a goal ruled out for Stoke after Peter Crouch's initial header was saved by Allan McGregor.

The Scot then saved from Crouch before Ryan Shawcross headed against the bar.

McGregor had been untested for most of the game but needed to be at his best in the closing 20 minutes as Stoke finally became an attacking force.

While there was little on-field action, Hull supporters continued their defiance towards owner Assem Allam's plans to change the club's name to Hull Tigers.

Allam announced in August the business that runs the club had already been renamed Hull City Tigers, and on Wednesday he formally applied to the Football Association to change the club's name.

Hull City have only scored more than once in three of their 18 games in all competitions this season, while striker Danny Graham has just one goal in 30 Premier League matches

Unhappy Hull supporters, who have set up the City Till We Die protest group to oppose the plans, voiced their feelings sporadically throughout, with the travelling supporters also taunting their counterparts.

The disruption has appeared to galvanise the Tigers at home - their last game at the KC Stadium a victory over Liverpool.

Steve Bruce's men went into the game having lost only once in front of their own fans this season, while Stoke's only away win was back in August, at West Ham.

The Potters, though, are exhibiting their best form since Mark Hughes took charge in the summer - with just one defeat in seven - but they showed little sign of taking the lead in an uneventful first 45 minutes shaded by the hosts.

Hull almost took the lead through Elmohamady's dipping volley, which was tipped over by a diving Begovic.

Stoke were showing signs of trying to implement the passing football that Hughes is encouraging, but there was little to threaten Hull early on.

Hull have kept a clean sheet in five out of their eight home league games so far this season. Their only Premier League home defeat came against Crystal Palace.

And the hosts were looking far more threatening as Begovic was again called into action, tipping Sagbo's low strike wide after a good cross from Elmohamady.

They should have been ahead midway through the half when Curtis Davies rose unmarked eight yards out, but he could only head Tom Huddlestone's free-kick wide.

Little improved in terms of quality and excitement after the break as the sides struggled to break each other down, with Shawcross diverting the ball well wide with his knee when a corner found him five yards from goal.

Marko Arnautovic spurned the visitors' best chance as, after latching on to a Maynor Figueroa header, he dallied on the ball with an unmarked Oussama Assaidi waiting for the pass.

Ireland then drove wide from 20 yards as Stoke finally showed signs of coming to life as an attacking force.

And the visitors thought they had taken the lead when Ireland tapped the ball into the net, following McGregor's save from Crouch's downward header, but the flag was rightly raised for offside.

And just minutes later Shawcross saw a looping header hit the top of the crossbar as the visitors almost snatched just their second away win of the season.

"I think there were limited chances at either end and it was probably a fair result.

"In the first half, the goalkeeper pulled off two terrific saves. The team have been magnificent defensively, another clean sheet.

"The players have worked extremely hard from day one and I think we are very much in a position we are pleased with.

"Today I thought the assistant did his job very well, Stephen Ireland was quite clearly offside."

"I thought we were the side who demonstrated more control, we had more clear-cut chances. I am pleased enough with the performance.

"The only frustration is maybe because we haven't taken maximum points given the chances we created. Their goalkeeper made some outstanding saves. I thought we were totally in control.

"We have good ability we just need that cutting edge. I was pleased. We have been reasonably consistent and we will get better."