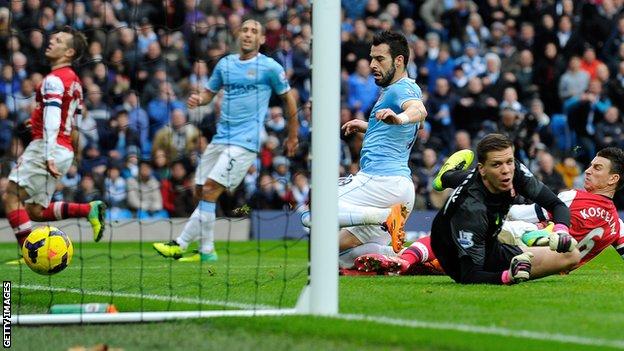 Manuel Pellegrini's side closed the gap on the Gunners to three points with another in a growing list of devastating attacking displays at home this season.

And they have piled on the agony for North London's two contenders as Arsenal suffered following City's recent 6-0 demolition of Tottenham.

The visitors may point to some questionable offside calls and a rejected penalty claim - but in reality they were ultimately blown away by the sheer firepower of a City side who have now scored 35 league goals at home this season and in 58 consecutive games at Etihad Stadium.

City are not simply beating teams at home, they are dismantling them and if they can replicate part of this form away from home they must surely be title favourites.

Sergio Aguero's early goal was cancelled out by Theo Walcott but Alvaro Negredo put City back in front before half-time.

City's potency was not reduced by a calf injury to Aguero, with Fernandinho extending their lead before Walcott's second restored some optimism for Arsene Wenger's side.

But the hosts were coming at Arsenal from all angles, with David Silva and Fernandinho again finding the target before Per Mertesacker's header made it 5-3 in stoppage time.

City's brilliance deserved the final word - and so it proved as Yaya Toure's penalty gave them another six goals in what is become a catalogue of virtuoso performances at home.

City have scored in 58 consecutive Premier League home games, a run stretching back to a 0-0 draw with Birmingham in November 2010.

As expected, City manager Pellegrini restored Costel Pantilimon in goal, despite Joe Hart playing his part in the midweek Champions League win against holders Bayern Munich in the Allianz Arena.

Aguero has been City's spearhead and he was at it again after only 13 minutes, showing perfect technique once more to sweep in a right-foot volley after Martin Demichelis had flicked on Samir Nasri's corner.

Negredo has proved a potent partner for Aguero and he should have added a second from Vincent Kompany's pass but could only find the side-netting.

Arsenal got some encouragement when a poor punch from Pantilimon landed at the feet of Mesut Ozil but the German could not take advantage.

It was a short reprieve for City as Arsenal were level just after the half-hour. Toure was guilty of conceding possession to Aaron Ramsey and then Ozil crossed for Walcott to side-foot past Pantilimon from the edge of the area.

Arsenal were only on equal terms for seven minutes, though, before Negredo made no mistake with a sliding near-post finish from Pablo Zabaleta, who had crossed after being found by Toure's perfect pass.

There was further bad news for Arsenal in the aftermath of the goal with defender Laurent Koscielny sustaining a deep laceration to his knee trying to stop Negredo and being taken off on a stretcher.

City suffered a setback of their own early in the second half when Aguero, who seemed to be holding the back of his calf, limped off to be replaced by Jesus Navas.

Pellegrini's side, however, have a rich variety of scoring sources and Fernandinho showed his threat five minutes after the break when he took aim and curled a low 25-yard shot out of the reach of the stretching Wojciech Szczesny.

Arsenal were not giving up and had a penalty claim rejected for handball against Zabaleta from Jack Wilshere's through-ball - with Olivier Giroud also glancing a header wide from Bacary Sagna's cross.

And their continuing threat was confirmed when Walcott got his second to give the Gunners hope again, another curling drive that flew into the top corner.

Sergio Aguero has 19 goals in all competitions this season, including 13 in the Premier League - one more than his league tally last campaign.

However, Arsenal's problem was they had no answer to City's pace, power and skill on the attack and Silva opened up the two-goal gap again after 66 minutes, giving Szczesny no chance from Navas's cross.

Pantilimon had endured a mixed game but illustrated why Pellegrini has placed his faith in him with a flying one-handed stop from Wilshere.

But City looked unstoppable going forward and more pressure was rewarded late on when Fernandinho slipped through some flimsy Arsenal defending to score the fifth.

Mertesacker's injury-time header provided nothing in the way of consolation as there was still time for City to score again, Toure beating Szczesny from the spot after the keeper brought down substitute James Milner.