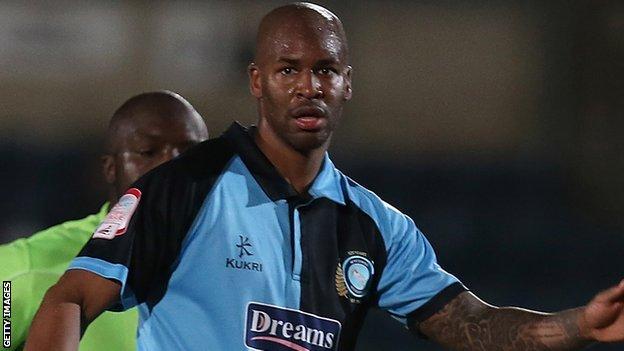 Deon Burton scored his first goal in 12 games to give the visitors the lead, before Wycombe's Josh Scowen was sent off for two late tackles.

Home goalkeeper Matt Ingram denied Sam Winnall and David Syers to keep his side in the hunt.

And Johnson then headed in at the death to the delight of the home fans.

"I thought the lads deserved it (the late goal), 10 men worked really hard to get something at the end and chucked everything forward.

"Josh Scowen's red card, I've had a right go at him. I think it's reckless, I think he's stupid getting sent off, and he knows it. He's down, but he'll learn from that.

"It feels like a win, but I'm angry because we had chances in the first half and didn't convert, and just a couple of bad decisions.

"Two big players injured and a suspension. But this is football and I love my job. I'll be in on Monday morning trying to try out how I'm going to do things against Northampton [next Saturday]."

"I've got to look at the bigger picture - 10 points out of 12 in the last four games, three away games out of four; the only disappointment today for me was the officials.

"I suppose the other disappointing thing is that we've not managed to finish them off.

"We've had two or three chances at the other end to kill the game, but it wasn't to be today.

"We have to give them credit because they kept on going until the end."