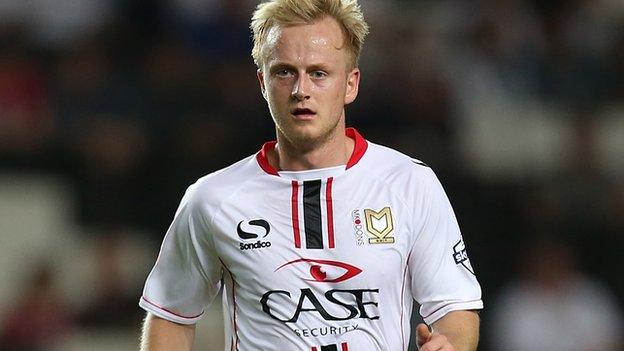 Promotion-chasing Wolves fell to just a second home defeat in the league this season as MK Dons boosted their stuttering play-off hopes.

The visitors went ahead when Patrick Bamford finished well from a Samir Carruthers pass.

Ben Reeves doubled the lead with a superbly struck effort from long range after half-time.

Wolves sub Liam McAlinden fired across the face of goal but they were second best throughout.

Defeat for the hosts means they drop one point behind leaders Leyton Orient and are now just three ahead of third-placed Brentford.

Karl Robinson's side, who had not won in the league since 2 November, remain nine points outside the play-off places.

"It had everything I love about football, the passion, the desire, the quality, the ball rotation, and two wonderful sets of fans. We are very happy about how we have performed, and we've got to use this as a catalyst for the rest of our games.

"Patrick [Bamford] has got so much support mechanism whether it's from Chelsea or MK Dons, but it's not about the support we that give him, it's how he takes that responsibility - and he took that on and put that into the game. That's why he's going to be such a quality player and a quality asset for Chelsea.

"Now [the players] are back to where they belong. They're back to a group of people who know what it takes to win football matches".