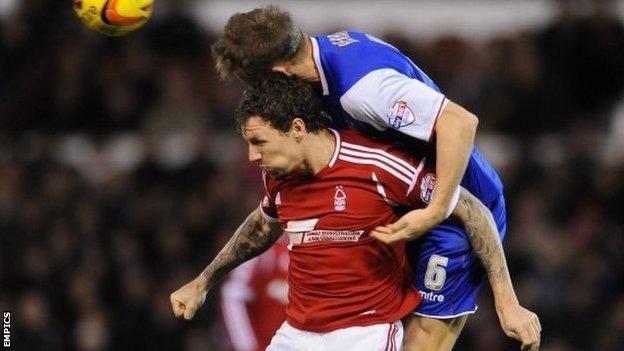 Nottingham Forest's search for their first home win since 28 September continued after they were held to a goalless draw by Ipswich.

Forest should have taken a second-half lead, but were denied by keeper Dean Gerken, who pounced to cut out a cross before Simon Cox had a chance to shoot.

The result leaves Forest in seventh, two points ahead of Ipswich.

Town had started the stronger, with Frank Nouble only denied a fine solo goal by a strong save from Karl Darlow after the forward had carried the ball half the length of the pitch.

Forest improved and had a shout for a penalty when Cox prodded the ball past Gerken before going down as the keeper slid in at his feet. Referee Scott Mathieson waved play-on following protests.

Cox was then unlucky when he steered a header against the bar, while at the other end McGoldrick forced Darlow into a great save before the interval.

After the break, the unlikely figure of Christophe Berra almost netted a well-worked winner for Ipswich as he charged into the box before striking a low shot that Darlow did well to push away.

"These things happen, some you get, some you don't. It is what it is."

He added: "We played against a side that is on fire. I thought for the majority of the game, we controlled it and 90% of our play was good.

"But, ultimately, football is all about chances - and you have to take your chances."

"It was a fabulous decision [to not give a penalty for challenge on Simon Cox]. He (the referee) got it right.

"He got the decision correct and he should be lauded for that. It is not me seeing things through rose-coloured specs. I have seen it and it was not a penalty.

"(Cox) was offside as well, to be quite honest, so all in all it was a good decision."