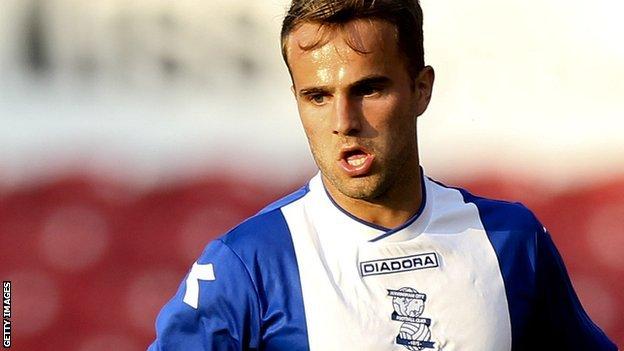 Andrew Shinnie and Nikola Zigic scored the goals to secure Birmingham City's third away win in a row at Bournemouth.

Shinnie got his first league goal for the Blues when he turned home an Oliver Lee cross early on.

Zigic got his fourth of the season just after the half hour mark when he slid home to double their advantage.

Blues on a roll

Birmingham are enjoying their longest unbeaten run of the season - they have not lost any of their last six Championship matches.

Lewis Grabban pulled a shot wide before the break for Bournemouth and Blues keeper Darren Randolph turned away Ryan Fraser's header late on.

Birmingham, now without defeat in six Championship games, only had to wait three minutes for the opener as Shinnie, a summer signing from Inverness Caledonian Thistle, put them ahead.

The Cherries have now won just one of their last nine league outings but they responded well to going behind.

Randolph was forced into a save from a Marc Pugh drive soon after the opener and Cherries top scorer Grabban was then denied by the Birmingham keeper, who tipped his header around the post.

The visitors doubled their lead when Jesse Lingard's defence-splitting pass sent Zigic through in the 34th minute and he put the ball under Bournemouth keeper Lee Camp.

Grabban then dragged an angled effort wide of the post when through one-on-one with Randolph before the Blues keeper pushed away Pugh's powerful volley after the break.

Bournemouth were pushing forward to get an equaliser but it left them vulnerable at the back with Manchester United loanee Lingard stopped only by a last-ditch Tommy Elphick tackle.

Randolph then denied Fraser as Birmingham secured the win and moved up to 14th.

"It is difficult to sum up as I thought we were excellent.

"We were on a high going into the game and but for the early goal I thought we would have won the game comfortably.

"We did everything but score and were the most dominant team. I wouldn't change much about the performance, the level was very high. If we give that performance on average over 10 games we will probably win nine of them."

"I knew all along when we had a few indifferent results at the start, and we had one or two blips along the way with not good enough performances, that the lads had given me everything.

"Confidence is high and they are now believing in each other and what we are telling them to do, as it is working. We have got to keep it going."