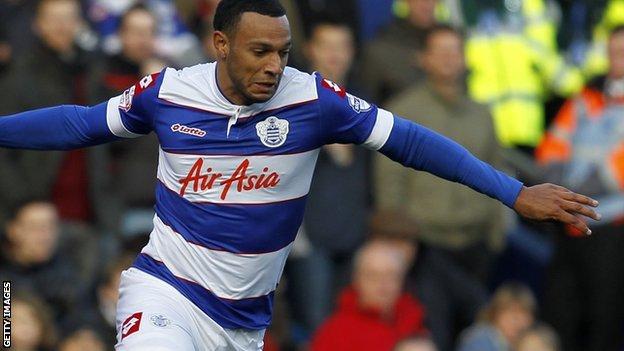 Matt Phillips scored one and created the other against his former club to help QPR move top of the Championship with a win against Blackpool.

The ex-Seasiders forward put the London club ahead when he fired in from outside of the area in the second half.

Charlie Austin sealed the three points soon after when he headed into the top corner from Phillips' cross.

After Burnley were held to a draw at Leicester earlier on Saturday, QPR moved to top of the division.

Defeat for Blackpool leaves Paul Ince's side two points off the play-off positions, but they had a promising start at Bloomfield Road.

QPR keeper Rob Green had to be alert to push away Steve Davies' header, before Barry Ferguson's free-kick caused havoc in the area until Craig Cathcart's effort was tipped over.

It was not until after the break that QPR tested Matt Gilks, with the Blackpool keeper stopping Phillips' 35-yard effort.

Blackpool have won just three of their last 14 Championship matches

Tom Ince then forced Green into another save to keep out his half-volley before the visitors took the lead in the 61st minute.

Phillips, who joined QPR from Blackpool during the summer, beat Gilks from 25 yards with a deflected effort and almost got a second soon after when the Seasiders keeper had to tip a shot wide.

But Austin rounded off the win from six yards out in the 73rd minute as Harry Redknapp's side secured their first victory away from home since September.

"We maybe lacked a bit of quality in attack in the first half, but we still created three or four good goalscoring opportunities.

"We were punished for that in the second half. We know how good they are and how good their squad is but Harry Redknapp has just told us we should have been 2-0 up in the first half.

"The goals were a combination of errors. The deflection for the first goal after we gave the ball away and perhaps the second was just a quality goal - a one-two and a cross and a good header."

"Matt Phillips did well, his first goal took a deflection but his cross for the second was brilliant.

"Charlie Austin hasn't had enough of those chances this season, but the delivery was perfect.

"Blackpool know what Matt has to offer and in the second half he was a big threat. He'll be very keen to do well for us in a side that wants to do things this season."