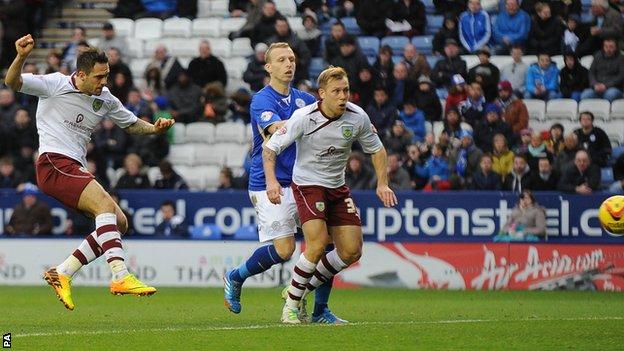 Ings smartly fired the ball into the net from close range for his 12th league goal of the campaign.

Former Clarets loanee David Nugent had opened the scoring from the penalty spot in a Foxes-dominated first half.

QPR's 2-0 win at Blackpool later on Saturday saw them replace the Clarets at the top of the table.

Leicester City striker David Nugent has scored 10 Championship goals this season, seven of which have been from the penalty spot. His one League Cup strike also came from a penalty

Looking to avoid a third straight defeat for the first time since April, Leicester started quickly as they put Burnley's defence under heavy pressure early on.

And they were almost rewarded within the first five minutes, with the lively Lloyd Dyer and Danny Drinkwater having goal-bound shots blocked.

The Foxes kept coming forward, with Anthony Knockaert seeing a fierce 20-yard volley held by goalkeeper Tom Heaton at the second attempt as Burnley were forced into some desperate defending to keep the score level.

Their resistance was finally broken, though, in somewhat fortuitous circumstances, as defender Jason Shackell was harshly adjudged to have pushed striker Jamie Vardy inside the penalty area, despite making little contact. Nugent stepped up to calmly convert from the spot.

Burnley had scored in nine away matches in all competitions this season and, having been out-played for 25 minutes, showed their threat when top scorer Ings headed Kieran Trippier's right-wing cross against the post.

The Clarets slowly began to work their way into the game but should have been 2-0 behind just before the break when Vardy dragged a shot wide of the far post with just Heaton to beat.

Having had little to do in the opening 45 minutes, Leicester's defence was sleeping at the start of the second half as Ings controlled Trippier's low cross from the right before converting from close range.

And Burnley should have been ahead five minutes later. Ritchie De Laet's back-pass from the halfway line went straight to Sam Vokes but home goalkeeper Kasper Schmeichel brilliantly parried his shot wide.

The visitors finished strongly, with strike pairing Ings and Vokes a constant threat, as Leicester were made to regret failing to capitalise on their first-half dominance.

"For the most part it was a very good performance from us.

"It was a tight encounter but we had enough chances to win the game, there's no doubt about that."

"I thought the players were a bit naive to come here and expect Leicester to not be on the front foot from the off.

"Our passing was a bit slow and we didn't use the ball wisely.

"But after their goal I thought we grew into the game and got better as we went on.

"We were just playing too much one-touch football in the top third of the pitch, so we had to build better."