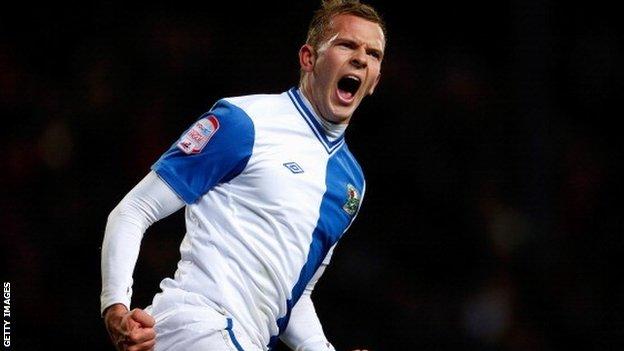 Blackburn recorded a second successive home win with a battling victory in testing conditions against Millwall.

Jordan Rhodes gave the hosts the lead, evading Mark Beevers before finding the bottom corner from the edge of the box.

Ben Marshall headed Rovers in front and a David Dunn header gave his team the cushion before Morison bundled in from close range to ensure a nervy finish.

But the home team held on to inflict a third successive away defeat on the Londoners, who are now just four points from the relegation zone.

Blackburn, who look comfortable in 11th position in the Championship, scored more than one goal at Ewood Park for the first time since the end of August.

Rhodes' 12th goal of the season set the hosts rolling, although Millwall dragged themselves back into contention with a brilliant team goal which ended with Waghorn sliding in at the far post.

Within three minutes of the restart, however, Rovers were back in front as the unmarked Marshall headed home from 12 yards for his first goal for the club.

Dunn's close-range header then went in off the far post for Blackburn's third before Morison struck for what turned out to be a consolation.

"We scored three good goals. We didn't play particularly great by our standards but we've played a lot better and lost games.

"We're happy with the character and resilience we've shown against a tough Millwall team.

"I didn't think we passed the ball well enough today by our standards. Sometimes the conditions were not great but you have to give credit to the opposition."

"We were the masters of our own downfall. The three goals we conceded were, I wouldn't even say schoolboy - probably Under12s.

"And that's the reason we're not looking up because going forward we're OK, a threat, scoring goals, but all season we've given away cheap, cheap goals.

"And again it's raised its ugly head.

"I can't keep saying it's unlucky. We're going to have to do something about it."