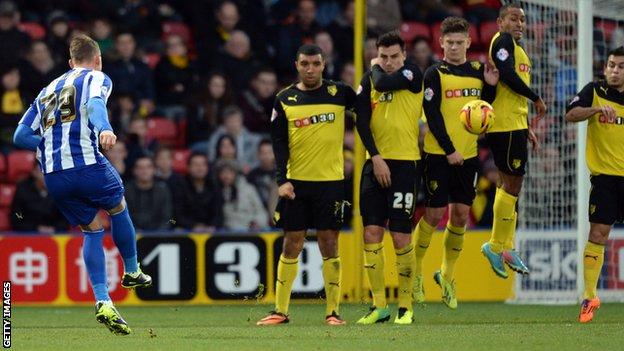 Sheffield Wednesday earned their first away victory of the season as Connor Wickham grabbed the only goal in their game at Watford.

Wickham scored with a 20-yard free-kick for his fifth goal for the Owls since joining on loan from Sunderland.

Watford, who suffered their fifth-successive home defeat, had more chances but could not get an equaliser.

The win, Sheffield Wednesday's second in three games, failed to move the Owls out of the bottom three but has taken them to within one point of 21st-placed Charlton.

But Watford, who came third in the Championship in 2012-13 and lost in the play-offs, have now failed to win in nine games and dropped into the bottom half of the table for the first time this season.

Gianfranco Zola's side started brightly as Murray's corner picked out Marco Cassetti but the unmarked defender could not direct his header underneath the crossbar.

The hosts created another opening when Nyron Nosworthy's ball forward picked out the run of Anya but, after side-stepping Roger Johnson on the edge of the area, the Scottish international was unable to hit the target with his right-footed shot.

Wednesday took the lead in the 24th minute after Wickham converted a free-kick he had won after being fouled by Nosworthy.

That proved to be the visitors' only shot on target with Murray and Anya frustrated by Martinez as Watford pushed to score their first goal in four home matches.

But Watford continued to be wasteful, and their afternoon was summed up in the last minute of injury-time when Diego Fabbrini fed Forestieri, but with only Martinez to beat from six yards out he stabbed the ball wide.

"I thought we deserved it. I'm pleased for Connor because he stays out after training and practises those free-kicks, so it was no fluke as such.

"The pleasing thing is obviously getting the clean sheet with a great away win.

"Watford are a good side, we felt at the start of the game we could hold our own if we could keep the crowd quiet because they've not been scoring at home or winning at home and I don't think it was a smash and grab."

"We tried to do something different, just to play one striker less and to have a more balanced team. We created some chances but they weren't enough.

"What is the real problem? I don't know. We are not going through a good moment in terms of confidence because we produce chances but it's difficult for us to score.

"And when they (the opposition) attack, they do it once and then they score so that certainly doesn't help the confidence of the players. That is what is creating a lot of pressure with the players and everyone.

"I know football is about results and results are more important than anything. I understand that and I'll see what is the best thing to do."