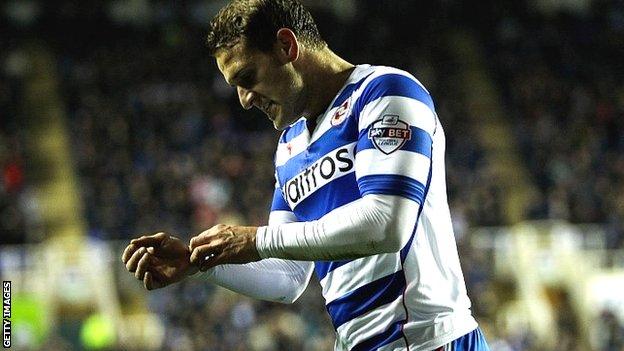 Billy Sharp scored his second goal in three games as Reading punished wasteful Huddersfield to rise a place to fifth in the Championship table.

Sharp, on loan at the Royals from Southampton since September, headed the winner from Pavel Pogrebnyak's cross.

Martin Paterson fired against the post and a number of other chances were wasted as the hosts pushed to level.

Their frustration was compounded in added time when Joel Lynch was sent off for a second caution.

Huddersfield were short on firepower, with top scorer James Vaughan sidelined by a thigh problem, and defeat sees them drop to 12th.

Missing key players through injury or suspension, Reading were forced to soak up early pressure before hitting Huddersfield on the break.

Kaspars Gorkss headed wide in the first minute, but the Royals did not create another chance until Sharp scored.

Pogrebnyak's centre gave him his chance and though Terriers keeper Alex Smithies got a hand on the downward effort, he only succeeded in palming the ball into the roof of the net.

Sharp drilled wide six minutes later but after half-time Huddersfield were back on top and Danny Ward's shot was blocked by Chris Gunter before a long-range Lynch effort was well held by Alex McCarthy.

Ward forced McCarthy into another good save and then Oliver Norwood fired over from an Adam Hammill cross when unmarked.

Paterson then struck the woodwork from Paul Dixon's cut-back and Royston Drenthe went close for Reading.

Pogrebnyak was only denied by Anthony Gerrard's vital block while at the other end Sean Scannell headed wide from close range.

Lynch was dismissed after being shown yellow cards for two challenges on Pogrebnyak late on.

"Reading would not have been able to complain if we had run away with that game.

"I am proud and pleased, and the players have done everything I could have asked. It's just in the penalty box where we need to keep a cool head."

"We knew this would be a challenging fixture and it's good to come away with the three points.

"Billy Sharp scored the only goal but we could have scored three or four. We were very offensive in our mindset, we saw the game out and won quite comfortably.

"There were two good teams on the pitch but our victory was well deserved and it's another three points on the road."