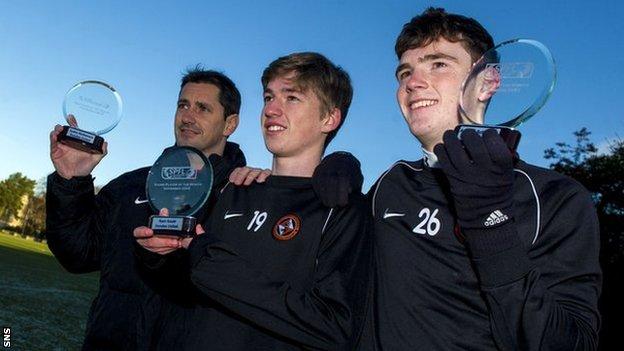 Dundee United have completed a treble of Scottish Professional Football League awards after Ryan Gauld won young player of the month for November.

and had already won the manager and player of the month prizes respectively.

And 17-year-old midfielder Gauld told BBC Scotland: "It is great recognition for the club, the way we've being playing the last couple of months.

I don't find the speculation unsettling at all. I find it nice to hear and nice to read, but I just forget about it straight away. I am very happy here

"It just shows how well we've been doing."

Gauld scored twice in the 4-0 defeat of Motherwell and set up all four goals in the 4-1 victory over Partick Thistle during November.

He was again in fine form as United moved into third place in the Scottish Premiership on Saturday with another display of free-flowing goalscoring, with Hearts beaten 4-1 at Tynecastle.

"That's the aim of football - to excite people - and I think this season we've got the ball down a lot and we've passed it about well and obviously that's what everyone wants to see," said Gauld.

"That's the way football should be played, so we're very happy with what we've done this season so far.

"The key part of our play has been to let the attacking players go and play, with Paul Paton and John Rankin, the two sitting players, they allow me, Nadir Ciftci, Gary Mackay-Steven and Stuart Armstrong to push forward and have the freedom to attack."

Rankin was among the scorers against Hearts, adding to goals from Armstrong, striker Brian Graham, who was handed a rare start in place of the suspended Ciftci, and Mackay-Steven.

His award coincided with more speculation about the future of the Scotland Under-21 midfielder, who has already been linked with top clubs in England and Spain.

"I prefer to just forget it all and get on with my football because that's what I enjoy doing most," he said.

"I don't find it unsettling at all. I find it nice to hear and nice to read, but I just forget about it straight away. I am very happy here."

"There's brilliant young players here and Ryan's just one of them," he said.

"He's been unbelievable this season and I don't think anyone's been surprised at the teams who have been linked with him. But he's so level-headed and he's just getting on with the job."

Robertson is hopeful McNamara's team can continue their rise up the Premiership.

"We are a young team, but we've got experienced players like John Rankin and Sean Dillon who are keeping us going," he added.

"There's not much point winning five games then losing it for the rest of the season. We've got to keep it going and keep picking up the three points."