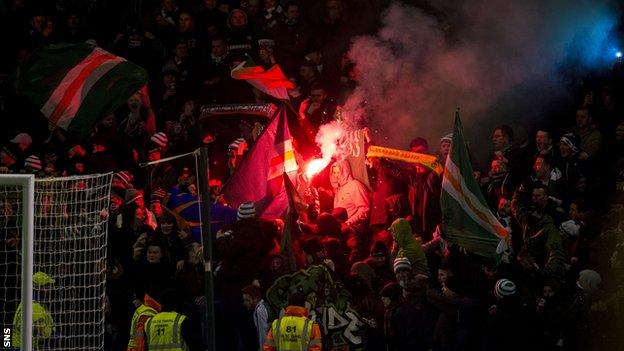 Celtic say they are "appalled" by the actions of some travelling supporters at Fir Park on Friday following the release of smoke bombs and flares.

Stadium seating was also damaged during the 5-0 win at Motherwell and the club is now carrying out an investigation.

Celtic manager Neil Lennon also expressed his dismay after a flare was thrown on to the pitch.

A statement said: "The actions of a small minority have again tarnished the great reputation of the club."

Police Scotland confirmed that "18 smoke bombs, three fireworks, and one flare were set off".

That followed incidents at Scottish Cup ties between Falkirk and Rangers and Albion Rovers and Motherwell.

The Celtic statement in full read: "Clearly we are appalled by the scenes from last night´s match and the actions of a small minority which have again tarnished the great reputation of the club and our supporters on a night when our team produced such a fantastic performance.

"We are currently investigating these events and will update our supporters early next week."

And a spokeswoman for Police Scotland added: "Significant damage was caused to seats within the ground and we are looking into this matter along with the club to establish the circumstances.

"There were no arrests made inside the ground."

Last month, Lennon criticised a section of Celtic's support who displayed banners with political slogans at a Champions League match, after which European governing body Uefa opened disciplinary proceedings against the Glasgow club.

On Friday, he was concerned a green smoke bomb landed in the Celtic penalty area close to goalkeeper Fraser Forster.

"It is unnecessary," Lennon told BBC Scotland. "I don't see what they bring to the game."

"It's at our end with our goalkeeper there and it's always a worry that by accident someone could get hit or something could get damaged by it," added Lennon after his side's victory at Fir Park.

Motherwell have yet to comment on the damage done to seats in a section of the stadium populated by visiting supporters.