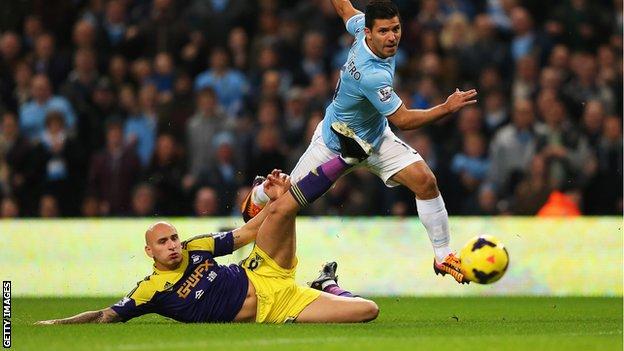 Both strikers have been in highly impressive form this season, with Uruguayan Suarez scoring 13 goals, two more than Argentine Aguero.

"Suarez is a very important striker, but I think Sergio participates more in the game," said Pellegrini.

Pellegrini last month said he believed Aguero was the finest player in the Premier League and, in world terms, only behind Barcelona's Lionel Messi and Real Madrid's Cristiano Ronaldo.

The Chilean boss said he was delighted at the way his 25-year-old forward had been working on his game, notably when he is without the ball.

"Sergio is just 25 years old, so I think of course he can improve," Pellegrini said. "I think this year he has improved a lot in the way he works during matches.

"He has always been a top player and he has always scored goals, but I think at this moment, he has added working for the team without the ball, which is also important for him.

When asked whether city rivals Manchester United, who lie ninth in the table - 12 points behind the Gunners - were already out of the title race, Pellegrini did not want to be drawn.

"I think the fight for the Premier League is exactly the same," he said. "There are eight or nine teams that are very close in points."

City - who are third, six points behind Arsenal - have won only two of their seven Premier League away games this term.

Pellegrini is optimistic his captain Vincent Kompany will be fit enough to keep his place in the team for the trip to eighth-placed Southampton.

The defender, who has been sidelined by a thigh problem, made his first appearance since 5 October on Wednesday when he played for the whole of the victory at West Brom.

Pellegrini again refused to say whether Costel Pantilimon or Joe Hart will start in goal.