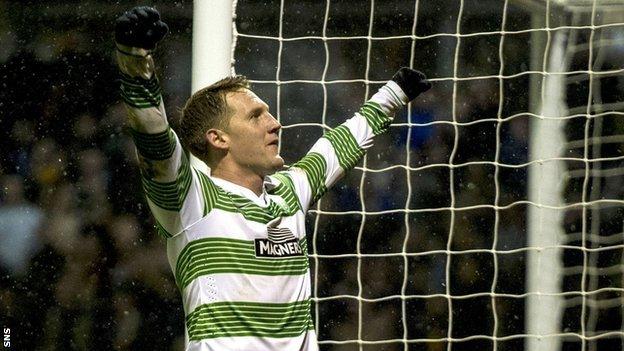 Kris Commons exemplified Celtic's determination to put Champions League disappointment behind them by rising from his sickbed to score twice in the dismantling of Motherwell.

And forward Commons revealed to BBC Scotland: "I've been laid up in bed all day. I've not been too well.

"I think at the minute we're in a very ruthless mode."

Commons opened the scoring and followed Efe Ambrose's second with the third before late strikes from Anthony Stokes and Bahrudin Atajic.

Atajic was a 79th-minute replacement for Commons, who was not disappointed to miss the chance of a hat-trick as the young Swede grabbed his first Celtic goal.

"I've been a bit flued up, so I was happy to come off as I was looking up at the clock after about 70 minutes ready for another oxygen tank," he said.

"So it was nice for Bahrudin to have that kind of impact, get on the field, play with the big boys and get his goal."

"If we were playing at this level consistently in the Champions League, you never know where it might take us," admitted Commons.

"But that is done and dusted now and we must concentrate on next year and the only way we get in that environment next year is winning the league and we're trying to do that convincingly this year.

"I was looking at a few clips of previous games here and we do sometimes struggle.

"But we carried our form on from the Hearts game. We're not happy at winning two or three, we want to go on and get five or six."

Celtic lead the Scottish Premiership by eight points and remain unbeaten in domestic football this season.

Asked if they could end the season unbeaten, Commons said: "There's a lot of talk about it, but it's extremely difficult.

"A lot of places away from home where you've got to play well, but at the minute we are going to the difficult places like Motherwell and Hearts and putting on performances."

Manager Neil Lennon hopes they can take their form to Spain on Wednesday for a game he still views as important to his side's development.

"Chances to play Barcelona don't come round very often," he pointed out.

"We will endeavour to get something out of the game and they can learn from the experience of playing in the Nou Camp as well and that will stand us in good stead for the rest of the season here.

"I am really pleased with the consistency and intensity of the performances and we need to take that into Wednesday night and try to get something out of the game."

Scotland winger James Forrest, Wales defender Adam Matthews, Georgios Samaras and Nir Biton could all return to the Celtic squad for the trip.

"We are hoping James will be okay and we're hoping Adam Matthews will join the squad as well," said Lennon.

"That will give the squad a lift as we've missed him a little bit and Sammy and Nir Biton should be okay as well."