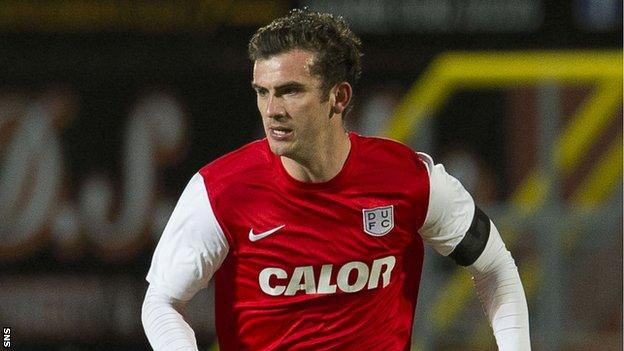 Manager Jackie McNamara has high hopes of persuading Mackay-Steven and Armstrong to stay beyond their current deals, which end in summer 2015.

Gunning is only tied to the Tannadice outfit until next summer and United have spoken to his representatives.

"They're not prepared to sign anything at the moment," said McNamara.

"So, we'll respect that and hopefully we can open that up again later on.

"I'm hopeful we'll sit down and try to convince them that it's the best place for them for the next year or two."

Mackay-Steven, who arrived at Tannadice after spells with Ross County, Liverpool and Airdrie United, recently won his first Scotland cap.

The 23-year-old was joined in Gordon Strachan's squad by Armstrong, a 21-year-old product of United's youth system, who has been captain of the national under-21s.

United have already extended the contracts of teenagers Ryan Gauld and John Souttar until May 2016 after the 17-year-olds broke into the Premiership club's first team.

"We're trying to get round them all to be honest," added McNamara.

"It's important for me that we try to keep this squad together.

"I believe we've got a good squad at the moment. I'm in the process of speaking to a few that I'd like to get tied up."