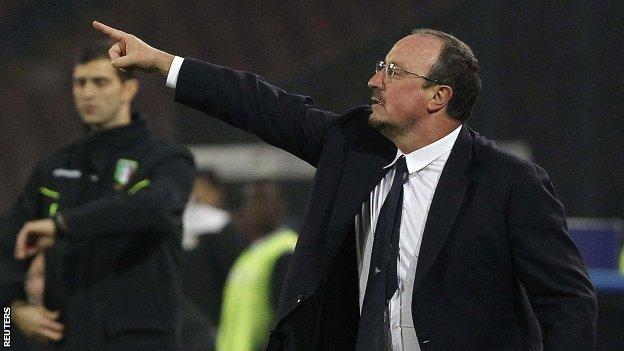 Napoli prepared for Wednesday's crucial Champions League visit of Arsenal by losing the lead twice to draw with Udinese in Serie A.

Goran Pandev scored twice for the hosts with Blerim Dzemaili restoring their lead after the break.

Dusan Basta levelled late on, after an own goal from Federico Fernandez and a Bruno Fernandes strike for Udinese.

The draw leaves Napoli third in Serie A, eight points behind leaders Juventus and two behind Roma.

Napoli, who lost 2-0 at Arsenal in October, went ahead with a quick-fire Pandev double against the run of play towards the end of the first half.

The Macedonia forward first prodded home from close range after Fernandez's knock down on 38 minutes.

And, despite Udinese having created the better early chances, Pandev doubled the lead just three minutes later when he fired into the net on the turn, after Gonzalo Higuain's run and cross.

The visitors were given hope on the stroke of half time when Fernandez turned Maurizio Domizzi's downward header into his own net.

Udinese were level through Fernandes' brilliant dipping 25-yard shot, but Dzemaili put the hosts ahead again a minute later after Higuain's shot was saved.

The visitors were not to be denied though as defender Dusan Basta scored from close range following a corner.

Shots on Target
Home6
Away7