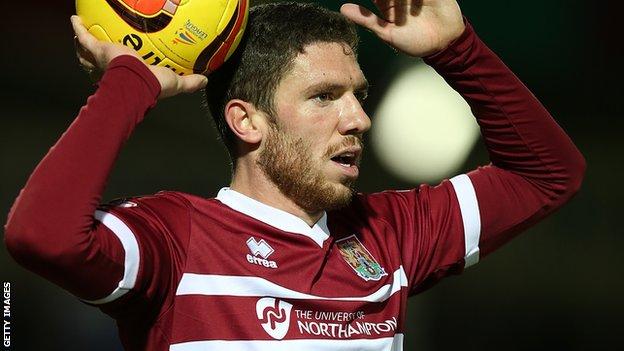 Northampton's Ben Tozer fears manager Aidy Boothroyd lost trust in him after a poor start to the season.

The 23-year-old defender played every match of the 2012/13 campaign, but last week was sent out on loan to League One Colchester until January.

"I deserved to be dropped at the beginning of the season," Tozer said.

"I played well away [at Hartlepool on 23 November] then got dropped for the Tuesday [versus Chesterfield]. Maybe [Boothroyd] didn't trust me then on."

Tozer, who was an unused substitute in Colchester's 2-1 defeat to Tranmere last week, continued to BBC Essex: "I get on really well with Aidy and I haven't got a bad thing to say about him.

"I'm sure he hasn't got a bad word to say about me, either. It's difficult but I'm willing to work hard to get back in the team, or to get in the team [at Colchester]."

Tozer has made 16 appearances for the Cobblers this season and admits it has been a difficult campaign so far for the side languishing in the League Two relegation zone.

"The play-off final defeat was a kick in the teeth and it was everyone's talking point in pre-season," he said.

"It was tough to take but you've got five or six weeks to get over it.

"We've got a whole new team now. It's hard for everyone to bed in well but I'm sure they'll get out of the trouble they're in.

"I'd like to do well here at Colchester and I just want to play."