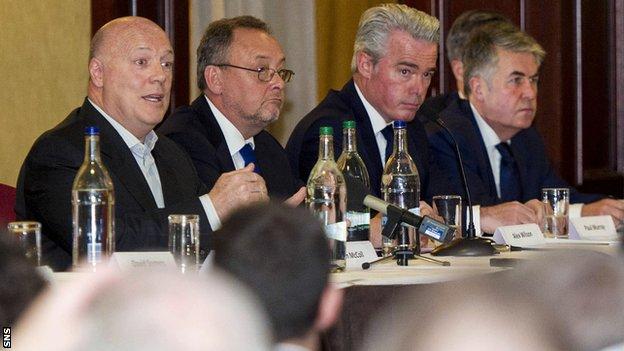 Rangers chairman David Somers has defended the current board following "wild and spurious allegations" from a group trying to gain control at Ibrox.

The group of dissenting shareholders has warned that the future of the club is at risk under the current regime.

But Somers defended his independent standing, claiming he has no connections with previous regimes led by Charles Green and Craig Whyte.

Four shareholders will seek election to the board at the club's annual meeting.

In a statement, the group - consisting of Paul Murray, Malcolm Murray, Scott Murdoch and Alex Wilson - outlined plans to "restore trust and transparency" at Ibrox if they are successfully voted on to the board at the 19 December gathering.

Until I joined the board a mere four weeks ago yesterday, I had never heard of Charles Green, Imran Ahmad, Craig Whyte, or any of the other characters in Rangers' history

Their plans include a guarantee that Ibrox Stadium can never be sold, fan representation on the board, directors and close associates having no interest in any club contracts and executive remuneration controlled and independently benchmarked.

Somers responded by urging shareholders to support the current board and admitted "the boards of recent years have been totally unfit to run this club".

However, he described the Murray-led group's allegations as "just like bogey men were used when I was a child".

A power struggle for the club has developed in recent months and the departures of Walter Smith, Craig Mather, Bryan Smart and Ian Hart left only finance director Brian Stockbridge and James Easdale on the plc board.

In recent weeks, Rangers have appointed , a new chief executive, , and non-executive director, .

The Murrays, Wilson and Murdoch say that, while the three new appointments to the board appear credible on paper, "it is still unclear who made these appointments".

And the group feels the new board members have "yet to prove their independence and earn the trust of the fans" by engaging with supporters and declining "to disclose who is behind the mysterious investors, Blue Pitch Holdings and Margarita Holdings".

Among the group's other concerns are "the significant cash outflows and the obvious dysfunctionality of the board" and a share price fall of nearly 40%.

Regarding severe criticism of Stockbridge, Somers said that, without the finance director, "the club would, in my opinion, have been de-listed months ago".

Our plan for the club is to restore trust and transparency

Somers insists he and Wallace have begun the "critical process" reviewing contracts as well as "improving our communication and engagement with all Rangers supporters".

And he added: "Yes, we will need to make decisions to improve cash flows and strengthen the business, but these will be the right decisions at the right time."

He urged shareholders not to vote the group on to the board at the upcoming AGM "firstly, because some of them were members or chairman of boards which failed this club in the past.

"Secondly, we need a board selected from the best available people - not just from fanatics who put their own personal interest ahead of the greater good of the club."

"Until I joined the board a mere four weeks ago yesterday, I had never heard of Charles Green, Imran Ahmad, Craig Whyte, or any of the other characters in Rangers' history," he added.