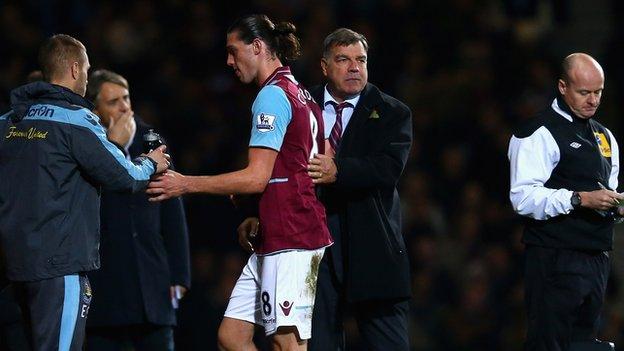 Carroll, 24, has not featured this season after aggravating a heel injury he sustained in May.

"We're in a difficult position but I can't panic into putting Andy in too quickly," said Allardyce, whose side are 17th in the Premier League.

"Andy will want to play quicker than he should and I'll have to calm him down."

West Ham have won just once in five outings and struggled to score goals, with Modibo Maiga and Carlton Cole their strike options in Carroll's absence.

"Basically, he'll be doing more and more with the ball now," added Allardyce, who admitted it was "extremely tough" to resist playing the striker at Liverpool on Saturday.

"He'll keep doing the strength and conditioning work he has been doing, but it'll be more about getting on the field with the ball at more intense levels as he goes along.

"My position is to take a sensible view, it's my responsibility to make sure he is there to stay when he comes back onto the field, and not just one or two games."

Carroll, England's most expensive footballer following his £35m move to Liverpool from Newcastle in 2011, joined the Hammers on loan from the Reds in August 2012 before making the move permanent at the end of the 2012-13 campaign.

Since sustaining the injury in the final game of last season, he has travelled between the UK and two rehab centres in Europe to undergo treatment.

"It has been a long, hard process but now I can see the light at the end of the tunnel," Carroll told West Ham's official website upon his return to training.

"It's been really hard watching the games while I've been out, we haven't picked up the results we have deserved, so I can't wait to get out there again and start helping the team to win some games."