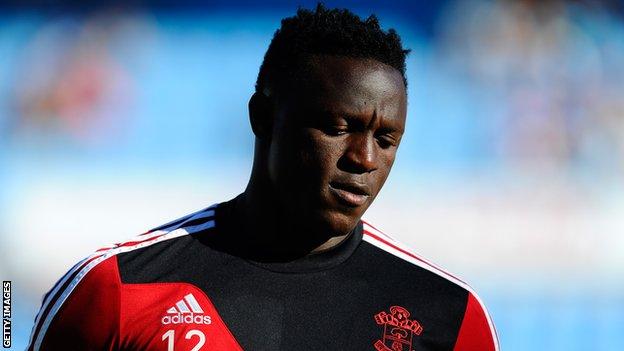 Southampton midfielder Victor Wanyama may face a lengthy absence after suffering a hairline fracture in his leg in the midweek loss to Aston Villa.

The Kenyan, 22, has played 14 times since moving from Celtic this summer, but Saints boss Mauricio Pochettino is unsure when he can return.

"We are unclear how long he will be out, we need to assess his progress," Pochettino told BBC Radio Solent.

Nathaniel Clyne (pelvis) is also out of Saturday's visit of Manchester City.

The pair, who have been key members of Southampton's side this season, are in good company on the sidelines, with fellow defender Jose Fonte a doubt and midfielder Morgan Schneiderlin ruled out again.

Wanyama is the first Kenyan to play in the Premier League and won his first pair of football boots aged 14 as a reward for being the best player at a tournament.

He previously played barefoot as his parents could not afford to buy him boots.

Guly do Prado and Danny Fox are long-term absentees, while Paulo Gazzaniga will again start in goal as Artur Boruc fractured his hand last week and back-up Kelvin Davis is struggling with a side injury.

However, despite their injury worries, Pochettino says they will not be rushed into deciding whether to strengthen during the January transfer window.

"Injuries always change your plans and have a negative impact but we need to keep on working and believing in ourselves," he said.

"We need to analyse the injuries before deciding whether to strengthen."

Saints' fine start to the season is fast becoming a distant memory, with Wednesday's 3-2 home defeat by Villa their third loss in succession.

And Pochettino is aware of the challenge facing his side at the weekend against Manuel Pellegrini's side.

"We are facing an amazing side with great footballers, we all know that. It will be a tough test against a good side," he said.

"When we don't have possession we need to put pressure on their inside game to cut the supply to Sergio Aguero."