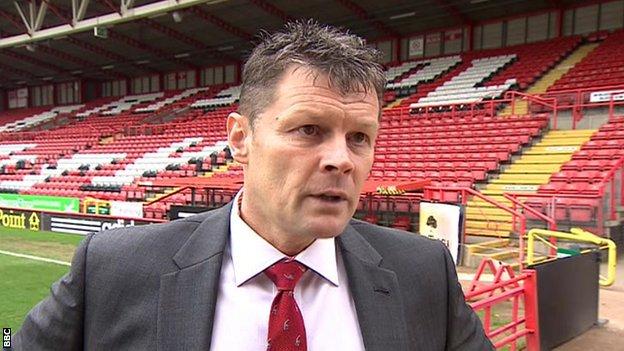 Bristol City manager Steve Cotterill says his side must be "humble" when they face Conference Premier Tamworth in the FA Cup second round.

City travel to the Lamb Ground on Sunday for what will be Cotterill's first game in charge following his appointment on Tuesday.

The Robins are second from bottom in League One, 45 places above Tamworth.

"There's no point in us going there and thinking we're fantastic," the 49-year-old told BBC Radio Bristol.

"We're nearly bottom of the league ourselves. We have to go there and be thoroughly professional, but humble."

"If we can work hard and get some results, then in a month's time it will look much rosier."

Tamworth toppled Cotterill's former club Cheltenham in the first round to set up the meeting with City.

He has fond memories of the competition, having led the Robins to round five in 2001-02.

"I've had a few good cup runs and it would be great to have one with Bristol City. The cup has been pretty good for me over the years so hopefully that continues," he said.

Cotterill returned to management this week after an 18-month absence, replacing Sean O'Driscoll at Ashton Gate.

And the former Nottingham Forest, Portsmouth and Burnley boss admitted: "I'm looking forward to a month down the line when my knowledge will be greater.

"You can listen to whoever you want to listen to, but it's far better to have the knowledge in your own head.

"If we can work hard and get some results, then in a month's time it will look much rosier."