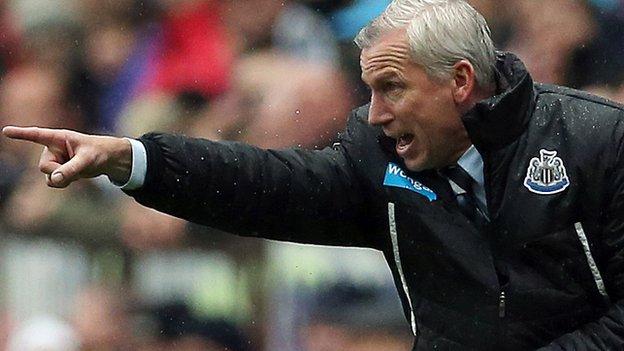 Pardew's side were unbeaten during the month, picking up four straight wins to earn the 52-year-old the award for the second time in his career.

His goalkeeper Tim Krul picked up the Barclays player of the month award.

The Dutchman, 25, kept two clean sheets in four matches, including a man-of-the-match display in a 1-0 win at Tottenham.

Pardew came under pressure before a ball was kicked this season, with speculation over his position intensifying when Joe Kinnear was brought back to the club as director of football.

The Magpies entered November without a win in three matches, including a 2-1 away defeat at the hands of local rivals Sunderland in the Tyne-Wear derby.

But goals from Frenchmen Yoan Gouffran and Loic Remy earned a 2-0 win over Chelsea, before Krul made 14 saves at Spurs, more than any other goalkeeper in a single game this season.

The display prompted his manager to describe Krul as "one of the best in the Premier League."

Pardew's side built on the two wins by beating Norwich and West Brom at St James' Park and, despite defeat at Swansea in early December, sit four points off the Champions League qualification places.