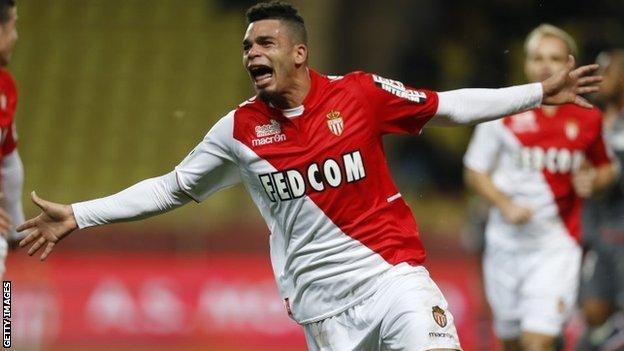 Monaco moved up to second in Ligue 1 with a dominant victory over Ajaccio.

The hosts looked under threat of being frustrated before Jean-Baptiste Pierazzi was sent off after 62 minutes for a second booking.

They got their goal when Emmanuel Riviere tapped home from a yard after Valere Germain and Andrea Raggi both failed to put the ball in from a similar distance seconds earlier.

Monaco, owned by Russian billionaire Dmitry Rybolovlev, spent over £100m on transfers this summer after winning the second tier last season, despite getting under 10,000 fans to their home games

Monaco took advantage of Lille's earlier slip to overtake them into second and move to within two points of leaders Paris St-Germain.

Landry N'Guemo had scored the only goal as Bordeaux won 1-0.

It was the first time Lille keeper Vincent Enyeama had conceded in 1,062 minutes, under two matches away from Bordeaux custodian Gaetan Huard's record of 1,176 minutes in 1992-93.

Monaco, who were without injured top scorer Radamel Falcao, were on top for the entire 90 minutes but failed to take a host of chances before Pierazzi's two bookings, both for fouls on Rodriguez.

Riviere scored the goal after it looked like another squandered chance by two of his team-mates and had Rodriguez gone an inch closer with both of his free-kicks, the visitors could have had no complaints.