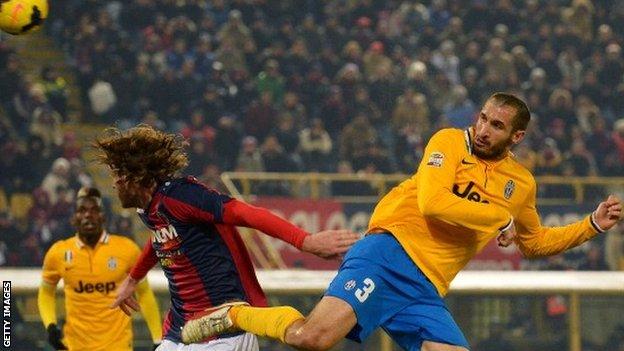 Juventus extended their lead at the top of Serie A to six points with a 2-0 victory over lowly Bologna.

Arturo Vidal and Giorgio Chiellini scored to secure the Turin side their seventh victory on the trot.

Midfielder Vidal filled the void left by injured playmaker Andrea Pirlo with a strike from the edge of the box.

But Juve, who started with striker Carlos Tevez on the bench, had to wait until the 89th minute for a second, when defender Chiellini headed home.

Coach Antonio Conte had asked for "clear heads" as he prepared his team for an "important moment of the season" which included this clash with Bologna and then Galatasaray in the space of five days.

With one eye on Tuesday's Champions League tie in Turkey, where defeat would eliminate Juve, former Manchester City striker Tevez remained on the substitutes' bench until the final 20 minutes.

But even without a host of regulars, the visitors were rarely troubled by Bologna, who have won just once at home this season.

Roma, who are second in the league and have been leapfrogged by in-form Juventus recently, play Fiorentina on Sunday.