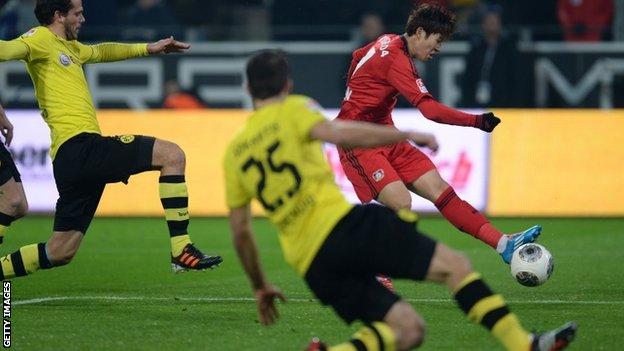 Leverkusen moved up to four points behind Bayern, who beat Werder Bremen 7-0, thanks to Son Heung-Min's goal.

Leverkusen had Emir Spahic sent off in a disputed decision for a tackle and Dortmund's Sokratis Papastathopolous followed for a second booking.

Dortmund's season is in danger of being all but over by Christmas, with a crucial game against Marseille on Wednesday, where a defeat could eliminate last season's finalists from the Champions League.

Last season Dortmund finished second to Bayern Munich in both the Bundesliga and Champions League.

But Sami Hyypia's Leverkusen are still in title contention after a deserved victory in Dortmund.

Borussia Dortmund striker Robert Lewandowski had a shot saved by keeper Bernd Leno before Son scored the opener. The summer signing from Hamburg was let in by a defensive mistake from Manuel Friedrich, the 34-year-old who left Leverkusen in the summer and joined Dortmund following an injury crisis last month.

Son was denied a second by a fantastic save from Weidenfeller a few minutes later and Jens Hegeler just chipped over as the visitors dominated the first half.

Spahic was sent off with 10 minutes left to give Dortmund hope after the defender went in two-footed on Lewandowski, although without raising his studs.

Dortmund had renewed hope and Lewandowski forced a save from Leno before Papastathopolous threw the ball away in anger and was sent off for a second yellow card. Pierre-Emerick Aubameyang fired a free-kick over and substitute Marco Reus forced a fantastic save from Leno but the hosts could not find a crucial equaliser.