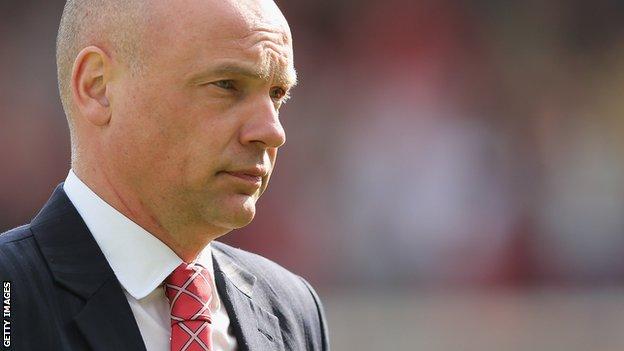 The Latics were granted permission to speak to Rosler, 45, on Thursday and he has agreed to move to the DW Stadium after talks with chairman Dave Whelan.

The German will watch Saturday's match at Millwall from the stands, before officially starting work on Sunday.

"Uwe is one of the brightest young managers in the Football League and his ambition is to manage in the Premier League," Whelan said.

"He impressed me enormously when I spoke to him. He has a strong philosophy about how to play the game and has a desire to shape all aspects of the long-term future of the club. I think he can and will achieve great things here at Wigan Athletic."

Whelan has agreed a compensation fee with Brentford to bring in Rosler as the successor to Owen Coyle, who left Wigan on Mondayless than six months after he replaced Roberto Martinez as manager.

FA Cup holders Wigan are 14th in the Championship and ex-Burnley and Bolton boss Coyle won just seven of his 23 matches in charge, leaving "by mutual agreement" following a 3-1 home defeat by Derby.

Caretaker manager Graham Barrow, who oversaw the Latics' 2-0 defeat at Leeds in midweek, will remain in charge for Saturday's Championship game at the New Den.

Rosler had been in charge of the Bees since June 2011 and led the London club to the League One play-off final in May, where they were beaten by Yeovil.

The former Manchester City striker leaves Brentford fourth in League One, having won the division's manager of the month award for November, and with the club celebrating being given the go-ahead to build a new 20,000-seater stadium.

Rosler's playing career was ended in 2003 when he was diagnosed with cancer and he later had spells as manager of three Norwegian clubs - Lillestrom, Viking and Molde.

They play their final Europa League group game against NK Maribor on 12 December, needing a win in Slovenia to stand any chance of qualifying for the knockout phase.