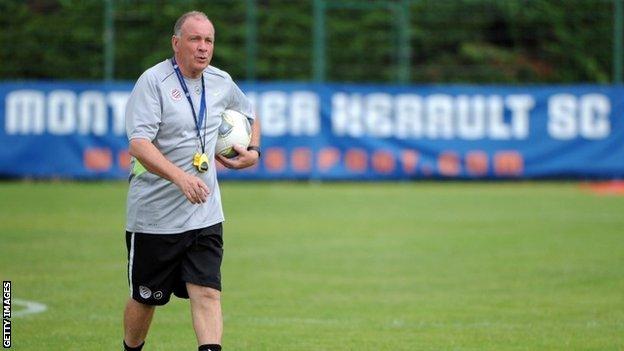 Montpellier boss Jean Fernandez has resigned after less than six months in charge.

The French side have slipped to 17th in the Ligue 1 table, one place outside the relegation zone, after a run of eight games without a win in all competitions.

Fernandez, 59, was named Montpellier boss in the summer, a year after Rene Girard had led the club to their first ever French title.

Montpellier won their only ever title in 2012, picking up 82 points - the second highest total in Ligue 1 history - to beat Paris St-Germain to the crown

Girard fell out with club president Louis Nicollin, who did not offer him a new contract at the end of last season.

In April, Nicollin confirmed that former Marseille, Auxerre and Nancy boss Fernandez would take over as manager on 1 July.

However, Fernandez only led them to two wins from his 16 league and one cup match in charge.